A ritual or theater – Now is the question 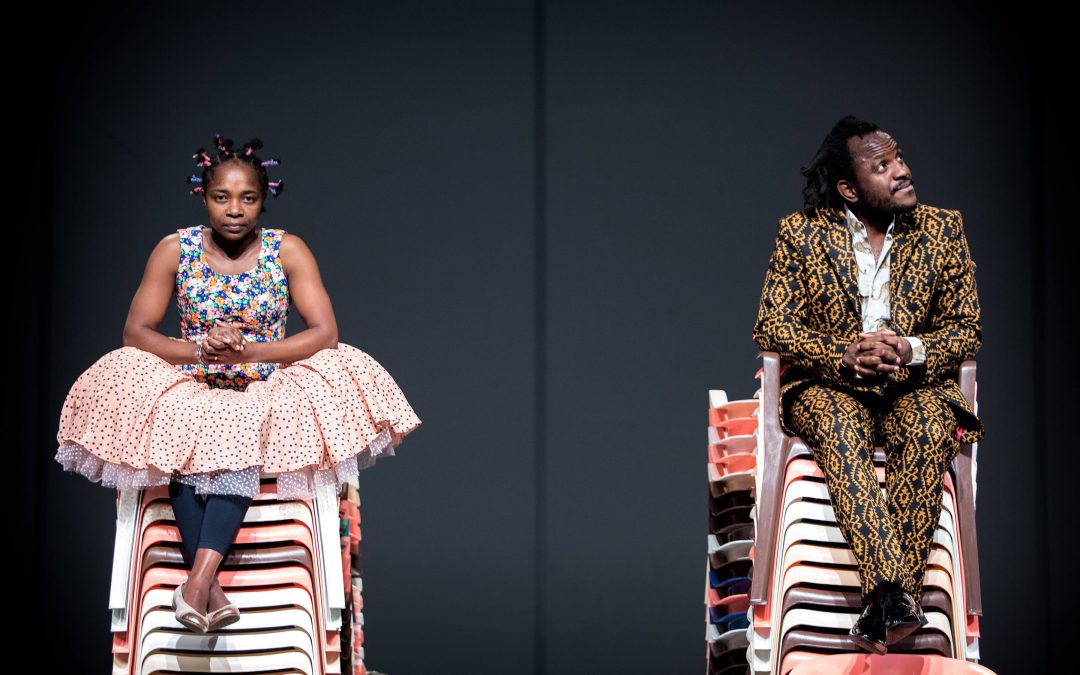 A ritual or theater – Now is the question

The performance “Fin de Mission/ohne Auftrag legen”, co-produced by German kainkollektiv and Cameroonian OTHNI – Laboratoire de Théâtre de Yaoundé, co-created by Fabian Lettow/Mirjam Schmuck (kainkollektiv) and Martin Ambara (OTHNI), closed the 58th International Theater Festival MESS. Based on a historical exploration stemming from contemporary economic migrations from Africa to Europe, and traveling into the past in search for the foundations of slavery in the New World, up until the 15th century, this performance speaks about a topic, which is hard to confront with for the superior “highly-developed“ Western civilization: slavery in its beginnings. A historical research as a textual template on stage is transformed into a musical and chorographical version, through which, in the same way, questions are asked about the foundations of European theater. In that sense, a sentence repeated by the Cameroonian performer David Guy Kono is rather suggestive “We do not need theater play, we need a ritual!” Because of this, one could talk about the anthropological approach to theater arts, motivated by this play. If we agree with that fact that the term anthropological theater refers to directives and performances which aim to teach man about his relationship with nature and culture, returning to the presupposed and construed beginnings the theater in archetypal situations (but not in the performing forms), for the performance “Fin de Mission” we could say that it completely corresponds with such criteria. The historiographic data hits like a boxing glove, while videotapes lead the audience to the source of trading of slaves in the New World, an abandoned island Manoku, they reveal Bimbia, until recently, a forgotten place where the second largest harbor on the African Atlantic coast was located out from which ships filled with “human goods” were shipped in the direction of the other side of the ocean – at one moment, on the video-wall, a map of all routs is drawn, and by which slave mongers sailed. Thereby, out from the cartography of the Euro-Atlantic world, a dark cartography of slavery emerges. The performance starts-off slow, with “Music at sea” by George Friedrich Handel, and while we are enjoying some of the most beautiful sections of baroque music, we find out that Handel acquired a large part of his riches through holding shares in the slave trade. Handel is not this exception among great artists. Shakespeare enjoyed searching for such good rates. Victor Hugo too. The citations from their thinking about Africa, countering the statements by which Angela Merkel supports the law about immigrant deportation, illustrate for us how some of the greatest cultural accomplishments of the Western civilization are realized through the exploitation of Africa. When the voice of Madeleine Pelagie Nga probes through, and overpowers Handel’s “Music at sea”, whose song of sorrow is followed by drum play, we realize that African culture is integrated in the foundations of culture of the Western civilization, and that “the spirits want to charge their debt”. “We need a ritual”, repeats David Guy Kono. The ritual he is invoking is a metaphysical road to absolution from sins. However, the ritual isn’t possible, given that the Europeans, by robbing Africa, stole and ritual items (among which are the masks). An anthropological examination of theater questioned its origin based in ritual performances, as well as the elements of ritual integrated into theatric performances, and thereby trans-mutated. These questions have, as written by theater studies expert Marco de Marinis, considerably contributed to overcoming the limited and egocentric notion of theater, which was left in its legacy by the European culture from the previous centuries. The theory about the origin of theater stemming from ritual performances maybe isn’t true, but is considered by this performance. David Guy Kono cannot perform a ritual, because the theater of the Euro-American post-mage society deconstructed such practice, thereby trivializing its formal logic. However, the awakened need for ritual, rises from the foundations of theater, and is doing the same in return, at present. Thereby, we arrive to the weakest part of the performance of “Fin de Mission” – its dramatic situations. By building the performance on principles of fragmented dramaturgy, the authors falsify the drama by presenting different personalities in European history on stage, who become characters from the history of slavery, thereby. Those scenes are built on principles of dramaturgy of a sketch, thereby relaxing the pathetic severity of the main narrative, through comical effects. In this way, the idea of the main narrative is made banal. In situations where there should be strong articulation of the counter-narrative, which would bear a firm antiracist discourse, everything is muted inside a polite and politically correct comedy. The words, “We need a ritual”, become ambiguous. They might be only a reflection of defeatism of man who watches how, by different means, contemporary society continues the practices of slave trade mongers and slave keepers. But they can also be a hunch, hinting at the end of the great Western civilization. What hides behind this hunch is impossible to answer, because our post-mage world has no trust in words of foretellers. The pride of rationalistic Europe, however, is just a pose taken, since long, by robbers of God’s image.