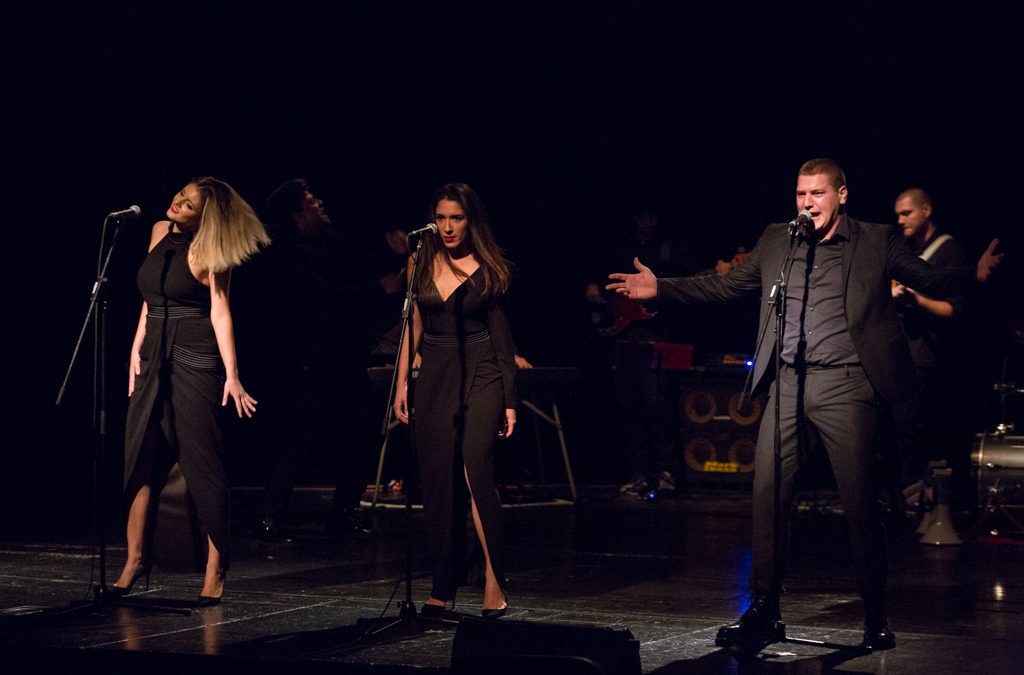 Last night’s performance of Marx’s Capital, by the Montenegrin Royal Theater Zetski dom, at the 59th MESS Festival, at the Sarajevo Youth Theater, mostly boiled down to one big concert of an hour and a half, with a double-ended debate, directed by Andraš Urban and dramaturgy by Vedrana Božinović, briefly interspersed with some of the most basic dialog scenes, with probably unintentional, endlessly humorous interludes. While the live music was playing on stage – We are all schizophrenic z-z-zombies. / We like to eat sh-sh-shit. / You have to be l-l-left-wing oriented, because it’s so s-s-sexy. – the performance was moving toward its grand finale: an acting cast spreading-out nylon, taking off their clothes and pouring onto themselves with what seem to be pizza ingredients, like flour, ketchup, cola, salami, and so on, while attempting to tie their neck with a rope and plugging an absurdly large dildo. and while all this time, in the background, there is a recorded monologue by Vedrana Božinović, which questions the current essence of problematic capitalism and the left-wing response today. True, there are a few sentences in that monologue that are great, and because they are brutally accurate (and rhyme): Capitalism is a box of chocolates you give to the doctor for operating. / Capitalism is the kidney you won’t get for transplantation.

Marx was dramaturgically interrupted by Sarajevo-based actress Vedrana Bozinovic, in consultation with Jelena Odalović and Minja Novaković. They dealt with the basic scientific achievements of sociology, such as the theory of base and superstructure, the question of production relations, the question of social justice from Nietzsche to Moore, through Marx’s historical materialism, and then the definition of class and goods, and the definitions of alienation, fetishism, fascism, and so on. Capital is not dramatized in the classical sense. It was insisted on writing the original stage text for actor’s play and song, based on the motives, that is, the process of creating new, dramatically potent motifs according to Marx. In the end, much attention was paid to the dramaturgy of the performance itself, which is in principle the best and only logical option in this case. Still, it is far from possible to call this process completely successful. Vedrana Bozinovic wonders about where the man is in Capital, while the audience wonders where Marx is in the play, without thinking thereby about a few cute bearded masks made by Marko Petrovic Njegos, which were worn by the actresses in topless when having to point a gun at the audience, standing on the proscenium under the spotlight, in a silent, somewhat awkward scene. This masked Marx was visible for the first time, not the third, or fifth times. Although, when the actors appear in topless, with the mask of Jesus, the situation becomes quite interesting and tense. But here, the scene between Marx and Jesus, which is a bit like ancestral sin and a Madonna video, is unfortunately interrupted and director Urban opts for an acting metonymy: they just eat an apple.

So, there is nothing new about Andras Urban. A whole stacking fruit and their juice, microphones and a band, angry naked actresses and the rape of male ensemble members. Although, this time both the music and the rape scene were great. Musicians Pićurić, Bjelica, Tatar and Zeković perform the basic tn-tn-tn piano-bass drum leitmotif theme of the capitalist zombies, composed by Irena Popovic Dragovic, which excels at varying, complicating, and adapting to the slightly darker atmosphere of the scenes / songs when zombies start to eat shit, compared to the more cheerful and faster ones when zombies are just being sexy. Young actors Jelena Laban, Jelena Sestovic, Pavle Prelevic and Stevan Vukovic, students of the Academy in Cetinje, in addition to having a chance to try something new and great at the beginning of their careers and have a good time, they also did a great job in the sense of the actor’s play, although there are many differences between them. Prelević, although at first glance the most unobtrusive on the team, actually plays the songs and scenes best and most correctly, because he insists on reductiveness and internal activity, as much as we can speak about internal activity in this type of theatre, while the rest of the collective oftentimes dives into exaggeration and noise-making. On the other hand, Vukovic is much better at classic play and dialogue. Sestovic showed incredible vocal and dance skills, while, for example, the energy and enthusiasm that Laban invested in the performance was worthy of all praise and is something rarely seen in theatre. The situation where she picks up the megaphone and says: This is a megaphone!, and then pleasures herself with it, is something from the world beyond and perfectly  fits with the aesthetics of the performance. By far the best scene, both in the sense of dramaturgy and acting, is the recreation of the origin of the principal capital. Prelevic plays the birth of capital. The team plays workers, society and politics. They spit him out, beat him, and then rape him, and at the end they leave. Prelevic is left alone and performs a vengeful monologue as capital about the future of the community and all the deviations which it will fall upon, and from a contemptuous and personal, more precisely personalized relationship, and the perspective of an almost Satanic ironization. In addition to performing it great, this monologue is also well written; For the first and last time in the play, Božinović touches on the real problem she is dealing with in the right way. On the other hand, the scene in which actors are discussing from the perspective of ethnic Montenegrins and ethnic Serbs in contemporary Montenegro, while painfully true, is nevertheless a violent actualization. The line which is drawn over fascism as the opposition and a consequence of poorly implemented socialism seems rough in terms of construction and artistic skill, as much as playing the anthem of Montenegro at the beginning or wearing the folk costume is. The scene is presented and performed in the manner of yelling and gags, so it serves much more as a comic relief, which was clearly the intention. The solution of spilling Montenegrin blood over Montenegrin land, in this scene, is not even a pamphlet.

There is something in the wicked clichéd statements referring to the Emperor’s new suit, kitsch parade, conclusion of the general place with the smart alec pulling up of glasses to the root of the nose or that irritating but irresistible one: what about the connection between hungry children in Africa and the spilling of that many groceries on stage? The programme book about the performance lists the groceries which can be bought from the average Montenegrin salary; the actors use the results of shopping from the annual gross income as dildo lubricant, which may even be a great solution, as it’s kind of a standout statement about zombie capitalists, with some traces of the less-faux-more-shock effect. Jokes aside, pages upon pages of text based on postulates of aesthetics, art theory, or even practical dramaturgy could be written, of how the definition of kitsch is actually the introduction of an explicit symbol or motif, completely devoid of context, functionality or deeper meaning. Or, say, absolute irregularities in reducing serious social-scientific concepts to one-dimensional general posters, again without context at the moment, because recurring after-serving is by no means an alternative. But, this would be completely unnecessary, considering how it’s obvious that the team, both the authors, but primarily the actors, absolutely enjoyed the process and this communicated with the audience until the very end. Sometimes, if not all the time, this may be the most important thing. An open mind should be kept in mind: while the audience, inspired by the dramatization of Marx, awaits the dramatization of anatomy textbooks in color, which will raise awareness on how the incurability of AIDS is still a huge problem; or dramatizing the new edition of the Bosnian Cook in order to draw attention to gastro-fascism among the geo-varieties of dolma recipes; it would be great for Andras Urban, while experimenting with avant-garde aesthetics, to finally try something new.