About the performance (for the) Monkey Mind 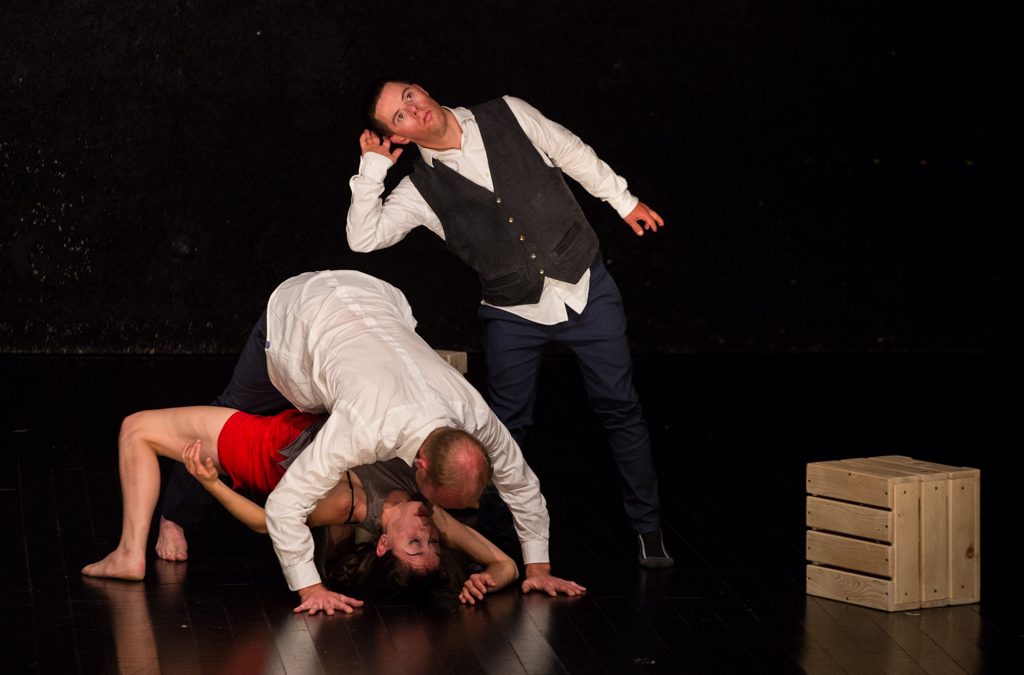 About the performance (for the) Monkey Mind

Starting off the third evening of the 59th edition of MESS, at 6 PM in SARTR, was the performance “Monkey Mind”, a project originating from the cooperation of director Lisi Estaras and dance company Platform-K, co-produced with the director’s belonging theatre house les ballets c de la b and the cultural centre De Grote Post from Belgium. Lisi Estaras is a Belgian director primarily working with dance theatre, whereby she explores non-verbal communication of complex thoughts and emotions. The project “Monkey Mind” was developed in 2016 through her collaboration with Platform-K, the only Belgian organization that provides the possibility to persons with disabilities to engage in dance. Playing in the performance are Nicolas Vladyslav and Anna Calsina Forrellad, together with three dancers with Down syndrome, Fernando Amado, Hannah Bekkemans, and Kode Wyffels, participants at Platform-K.

It is difficult to offer up a concrete summary of this performance. It is composed of a line of dance etudes, in solo, duette, trio, quartette, or quintette configurations, which are oftentimes overlapping in between themselves. The center of attention to moments in the performance is impossible to determine exactly. Five separate wholes are vaguely outlined, which could almost be called acts, but they themselves also overturn reciprocally, often without a clear beginning or end. Five segments of the performance can be defined as the beginning of man and acceptance of social roles, then as the submission to instincts and passions, and following after that is the emotional game of unfulfilled dreams, interrupted by a return into madness and party, concluded with the emotional convergence – at first between Frenando Amado and Anna Calsina Forrellad, and then the remaining three dancers joining them at the end.

The key to understanding the form of this performance is hidden in its title. Monkey Mind is a term from Buddhist philosophy, and it marks the state of mind that constantly skips from one thought to another, the same as monkeys do when jumping from one branch to another. This associative approach is where the dramaturgy of this piece lies. Besides, in accordance with the significance behind the coined title, the word “monkey”, by default, brings the tone of that which is primal, ancient, something that has been a reflexive association in Western thinking ever since the 19th century and Darwin’s theory of evolution. On the other hand, the word “mind”, or “reason”, represents the exact opposite, calling on ideas of reason’s domination established by the Enlightenment. From that context, an abstract narrative of the performance is born which continuously places the dancers in a gap between instincts, body reactions, and the logic of reason and fiction. In that gap, all humans are equally lost, whether they have a gene disorder or not.

The performance begins with an image of five people in their underwear wearing masks made from cardboard bags, some of which have details that resemble the shape of a monkey, such as the ears. At the beginning, they are all the same, and everyone has their space on the stage. The mise-en-scene has the composition of a perfectly symmetrical pyramid. Minimal movement from the dancers is noticeable, at first it is just the contraction of back muscles, then gradually turning into flexing and touching their body, especially the limbs. They gradually start to dress themselves. Two dancers are getting dressed much faster that the other three. Then they are taking off their masks and it turns out that the three of them have Down syndrome. At that moment their clothes start to represent certain social roles, and it becomes clear that it’s harder for them to adequately play them. That is also the last moment when the scene is in perfect geometric order, but also in disproportion. The liberation process which follows after is equally chaotic and intense for all five dancers. Throughout the entire performance, the switch between imitators and initiators is constant. They are all equally lost, searching for each other, but also themselves. This initial inequality, set-up through the act of dressing up, disappears as the dancers reveal their own physicality, urges and instincts, through solo etudes, and also in partner play, imitations, and the destruction of principles of symmetricality, and dispersion of focus of attention through the mise-en-scene.

One of the basic means of comedy, which Bergson highlighted in his study “About Laughter”, and that is based on physicality, is reducing man to an ordinary machine. This is achieved by rigid movement, and also constant repetition. The dances are doing the same, oftentimes making the audience laugh, while simultaneously presenting them with certain taboos. For example, sexuality of people with Down syndrome is a taboo in itself. In the performance, its represented through a funny scene with Hannah Bekkemans and Kobe Wyffles, who are talking and shaking hands in a robotized manner, talking, shaking hands, and then leaving to go kiss in the background. They continue kissing, while a parallel love scene between Nicolas Vladyslav and Anna Calsina Forrelland is happening, which is not made concrete, and remains literally undefined, followed by attempts of Fernando Amado to join the game, although in vain. In contrast to the chaos happening between the other dancers, the act of kissing in the background stops being a taboo, and becomes an ideal to which the others strive for. The initial, minimalist play with small movements and close ups, gradually increases in size and intensity. That transformation and graduality accompanied by interesting, mechanical sound effects, which follows the rhythm of the performance, and resembles a broken clock mechanism or music box. It becomes clear that they are all a part of some larger, absent machine, which is not the most functional, and that is in constant dissonance with the intense impulses of the dancers, who refuse to follow by its inharmonious rhythm.

The dancers emanate humanity and sincere emotion, which shines in somewhat lighter etudes followed by melodic music, in a funny way, by simulating broken wheels and screws of a social machine. The example for this is a segment about unfulfilled dreams where the tiny and delicate Hanna Bekkemans, separated from the rest, performs with only light movement of her arms, while in her own world. This emotional scene is interrupted by a sudden return to the explosion of expressive, intermittent, and repetitive toying with the exchange of imitators in this mechanical game. However, at the end, through the solo etude of Anna Calsina Forrellad, this comical mechanical movement starts to become creepy. The dancer stays in a halt in this repetition of all the etudes from the beginning of the performance, but compressed. Gradually, these shifts and movements, as well as twitches are starting to become faster, and more intense. This is when Fernando Amado approaches her, and lifts her on a pedestal and clams her down by gentle and soft caresses. In this beautiful, warm ending, hides the message of universal humanity, and deep empathy, skillfully communicated through touch and movement.

“Monkey Mind” is a complex performance with a chaotic structure. It is not easy to follow. Many etudes flicker on the border between funny and uncomfortable. At the same time it is very emotional, optimistic and humorous, achieving all that through an unconventional approach to dance, and an attempt to translate complex emotions and states into movement. Ultimately, this is presupposed by the director’s concept. You could conclude that the director achieved her goal, especially if she managed to awaken the monkey mind of the viewers, which is the case, at least when the writer of these lines is in question.