“All My Love” by the Sarajevo War Theatre: Does actor’s play always suffice? 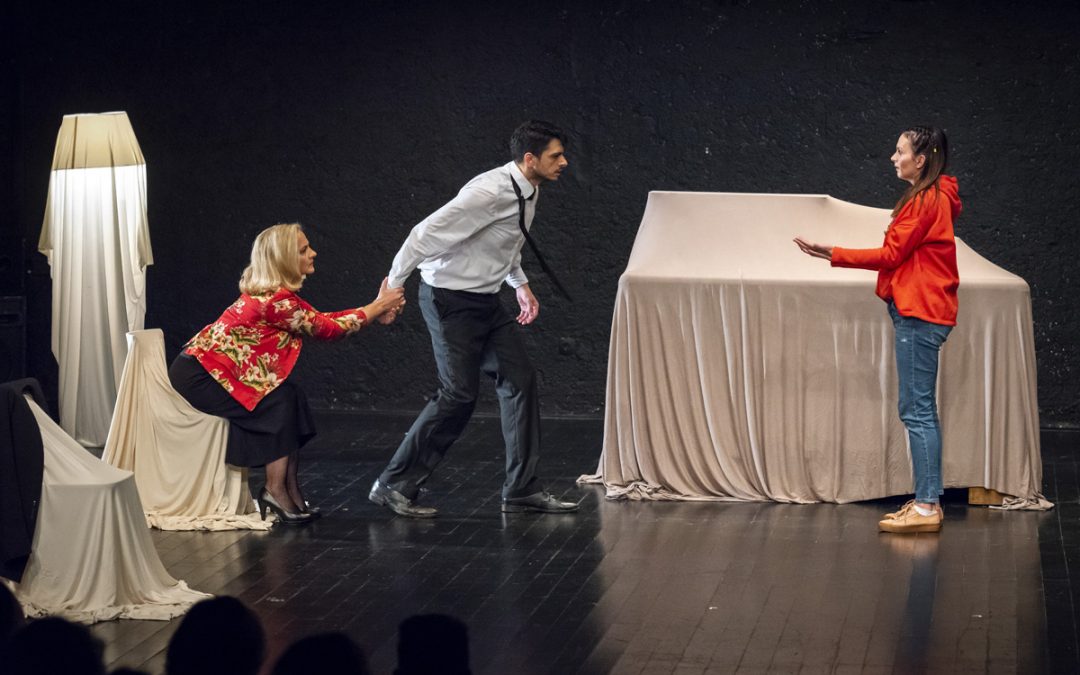 “All My Love” by the Sarajevo War Theatre: Does actor’s play always suffice?

All My Love, Laurent Mauvignier

In the accompanying programme Teatroskop of the 59th MESS Festival and Out of Competition, the performance All My Love by the Sarajevo War Theater, based on a text by French writer Laurent Mauvignier and directed by Zijah Sokolovic has been performed. Therefore, after several plays dealing with the current socio-political reality and opposite to the repertoire policy which is devoted to contemporary socially engaged theater, the Sarajevo War Theater has decided to set up a play which focuses on family and the individual who is trapped within their own psychological and spiritual walls. In accordance to that, the director of choice was Zijah Sokolovic, who places man in the center of his author’s sensibility, the innermost interior of which is only reached through actor’s play. However, is acting always sufficient for the definitive success of the performance, if other elements aren’t working in the best way?

The piece consists of a single family and its past, present and future which intertwine and unite in a single spatial and temporal state. After the death of his father, the Father (Igor Skvarica) returns to the village and the house where he spent his childhood, near the tree where his daughter disappeared ten years ago. Burial, family affairs need to be resolved, and he and his wife, Mother (Selma Alispahic), wish to return to the city as soon as possible. However, their memories are waiting for them and they come back in the form of a mysterious girl (Dženana Džanić) who claims to be Lisa, the lost daughter and sister. She substantiates her claim with a box containing things that the Father recognizes as those his daughter had, including a toy bear, which evokes the deepest, most intimate, but also the best memories of Lisa in the present. Soon, they are joined in the house by Son (Davor Sabo), who, despite his great desire to see his sister, refuses to face the possibility of her return and does everything to continue his life. In contrast, the Mother stubbornly refuses to move on and, as if it were a toy bear, holds the memory of her daughter firmly in the embrace. “To me, she is six years old and will always be six years old,” says Mother, explaining how she cannot recognize her daughter in this grown-up girl. Only the Father resolutely surrenders to the clutches of the beast of recollection which also nourishes him from the outside, but is killing him from within, and if you pay attention to it, its ready to mutate and appear in new forms, to switch from the past to the present, taking over life itself. Once a space filled with happiness and love, with their return it becomes a haunted house with the newly deceased Grandpa (Sead Pandur) as a living representative of the past, whereby the boundary between the living, the dead and the ghost of memory is increasingly thinner.

Drawing on the history of dramatic literature, Mauvignier has created a work of 14 sequences that utilizes Harold Pinter’s ambivalence, the lifelong numbness of Anton Pavlovich Chekhov, the futility of Samuel Beckett, and fusing the irrational and imaginative with the harsh reality, hinting at a stage space for catharsis. For those who for the loss of loved ones keep all their love for memory. Sokolović recognized all this and, in order to revive something of his liveliness, he left his entire stage to the actors and their interaction, which is certainly the best way to reach the most hidden parts of the human psyche. In the end, this turned out to be the correct reading of the piece, since Skvarica, Alispahić, Džanić, Pandur and Sabo, despite the occasional uncertainty during the performance, absolutely took over the stage and made this universal chaos in which memories and reality, madness and reason, love and hatred struggle for dominance, understandable, clear, life-like. Switching from one state to another and alternating vocal and facial expressions thereby, almost imperceptibly and yet clearly demarcated, the actors convincingly revive Mauvignier’s chaotic photographic album, which with each new scroll of pages and recall of memories, makes hate more dominant than love. The director demanded sobriety from his actors in order to emphasize the expressiveness of the spoken word, and to make the palette of various, diametrically oppositional feelings differentiate in nuances. Partner play thus works with the help of friction between the actors, in which there is both silence and the unspoken hidden, as well as denial and acceptance, the calmness of the body and its flight.

“The cry of the mother’s heart for her son, for the one who remains … All my love … but she is my love, I gave it to her, to her absence … All my love is what frightens me each minute of my life. We give everything for those who stay? But I can’t, I never could. And the worst part is that I don’t want to. Can you hear me? I do not want to, “says the Mother in a monologue addressing the Son.

However, when it comes to the cast, an absolute hit has been achieved with Selma Alispahić as Mother, Davor Sabo as Son, and Dženana Džanić in the role of Lisa, torn between woman and girl, a memory and living being, imagination and reality, while certain issues still arise about the choice of Skvarica and Pandur. And while one may find a certain explanation in choosing Pandur for the role of the dead Grandpa, and read that he is young because in the memories of him he remained as such, for the choice of the young Skvarica in his early thirties, to play a middle-aged husband and father of a teenager, there is no logical explanation, except the one hidden in the absolute absence of other solutions. Despite Skvarica’s acting talent and willingness to put on any character’s costume in any condition, it seems that Selma’s partner on stage would be better suited to someone her age or older, which is the case, for example, in another play by SARTR – Ay, Carmela, which is certainly felt when it comes to the verisimilitude of the development of the relationship between these two characters, while the one between Son and Father works much better.

Although rather scarce, costume design and stage design exist between the contemporary and the old-fashioned, the urban and the rural, the reality and the dream, the past and the present, while the opening music is imposed as a relatively poor choice, since it doesn’t work either for the idea, nor the content, or time and space in which it is housed, and is does not evoke any emotion and with its excessive modernity slides resolutely into pathetics and banality where its definition is merely a decoration.

Furthermore, on the one hand, the absence of dramaturgical progressiveness can be singled out as the central defect of the play, which keeps the stage on the same plane for quite a long time, and on the other hand it is this repetitiveness in changing the psychological and spiritual states of the main protagonists, occasionally, not as a whole, that helps to create a pure Chekhov snippet of one family’s life, where there are no violent entanglements or twists, breaks, or physical changes in space, and where the characters are not heroes who nonchalantly overcome all obstacles and regularly reach a happy ending. So it can be said that the director has boldly ventured into something that is not a common feature of current theatrical flows and is more prone to film than theater. However, it should be noted that they certainly could have improved on the rhythm, but not when it comes to acting, but the development of the plot, and to focus more on the changes and to mitigate the repetition of the information presented earlier.

Ultimately, the play All My Love is not an exciting, dramatic, technically spectacular piece of theater, but it still manages to get close to the audience at moments, but only at moments, bringing to life the snippets of the life of a living family which is dying of memory. Created through pure acting, in which all the love of this world is embedded.