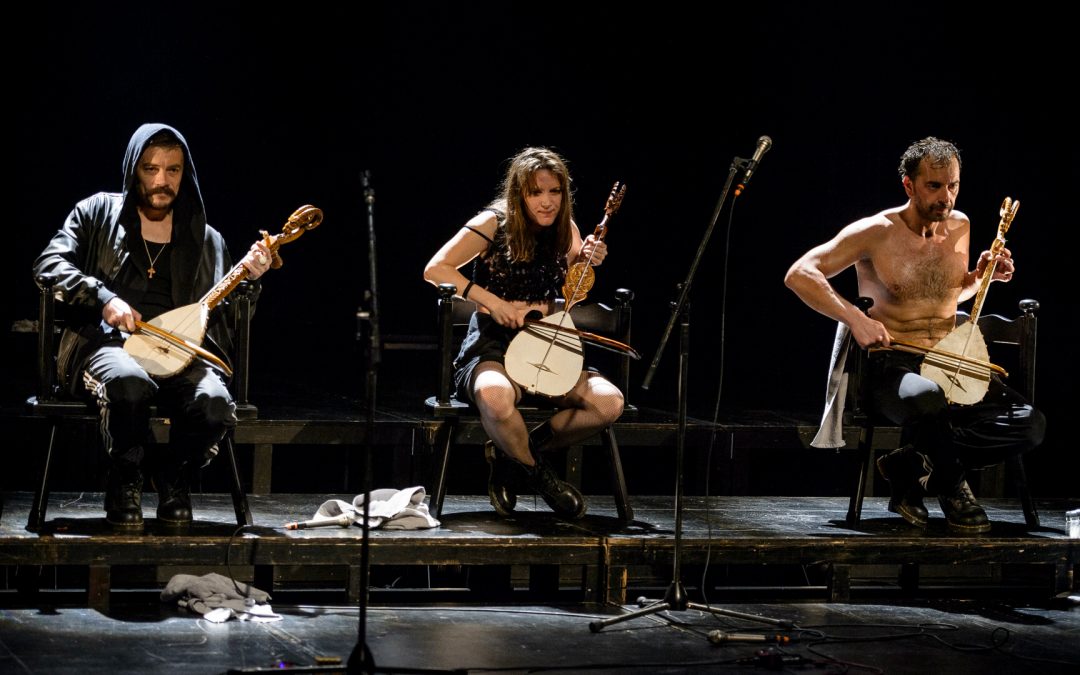 Playing on the third day of the festival, was a performance titled Butterfly – Exercise of Birth by author ALEKSANDAR RADUNOVIĆ, and directed by ANDRÁS URBÁN. The play is a production from the Royal Theater Zetski Dom in Cetinje, Montenegro. Butterfly – Exercise of Birth follows up with a husband and wife in the process of mourning the loss of their son. Coming to visit them is their son-in-law requesting debt payment from their late son. From that classic situation of a fatal visit, interesting topics are being unveiled, especially the matters of the relationship between responsibility and guilt. The drama is of a relatively classic structure, written through the three characters and standing somewhere in between a social drama and a crime thriller. Thematically it can be observed as a study of revenge and mourning. Andras Urban hypertrophies the soundscape of this theatrical performance. In the first part he separates the spoken word of the actors and transports it into the soundscape. The actors remain as an almost physical remnant of the spoken text. They remain trapped in various rituals – the woman carrying brandy and cake, men unified in sorrow. The separation of text in the first part opens the potential for creating a space of intimacy, longing and suffering, a sort of a black box for trauma. However, it’s important to note that the radio drama was missing some elaboration and precision. Namely, the parts based on aggressive soundscapes turning into shouting very easily, and the border between the two male voices becoming very thin, and then affecting the all-around comprehensiveness. A little bit later, the actors take on the text and they are saying it through microphones which are set-up at the stage. By doing so, the drama that is intimate is related as a public matter. That is how the focus shifts from private to public, rituals and customs, crime and local contexts. Unfortunately, such type of hypertrophy of the soundscape reveals the biggest weaknesses of the drama piece. In the text, the three characters insist on their positions and very often, thoughts that are defining them at that sense, are repeated. Along with some clumsiness, the text that is spoken into the microphone is interrupted by banality. The music is extremely suggestive and it assists in creating an atmosphere of tension, and repressed aggression. The music which swallows both actors and words, and the text, created a claustrophobic and hermetic set-up of the piece. It is good to note that for the duration of the play there were a lot of technical issues and that my critique should be considered with a dose of doubt. However, I will admit, that when one of the microphones finally stopped working altogether, something interesting had happened. This sort of bodily and emotional extreme, which was attempted by the play throughout, finally happened. The actor Srđan Grahovac had to let go, bring himself into a state of uttermost strain, and the edge of performance. Because it was needed to overcome the loud music by voice alone (screaming), the microphone failure, the actor’s heat and the monologue, so to continue with the performance. The failure of one of the microphones uplifted the entire performance to the desired level, to a display of extreme human states, a display of utter despair, borderline madness, and, why not – a human shriek. This would definitely would not be possible without the very beautiful interplay of the three actors. Along with mentioned Grahovac, we also have Ana Vujošević and Dejan Ivanić. Their interplay is the basic motor of this performance which establishes a certain suggestive theatrical space. They succeeded in conquering the territory where trauma reigns supreme and tyrannizes, erasing borders of logic and leaving only hopelessness. The play’s end is on the edge of absurdity. The ending suggests that the entire human suffering is only part of folklore, an ordinary line of curses. They, although frightening, can still make us laugh. Even if through tears.

Dino Pešut was born in Sisak in 1990. He studied Dramaturgy at the Academy of Dramatic Arts in Zagreb, and in 2017 he graduated from Master studies of Dramaturgy, specializing in dramatic and cinematic writing. He is working as a dramaturge and a director in Croatia and abroad. As a dramaturge he most often collaborates with director Selma Spahić. From their collaboration, notable plays are The Master and Margarita (Croatian National Theater in Rijeka, 2016) as well as 1981. (Slovenian National Theater in Maribor). As a dramatist he debuted with the drama The Pressures from My Generation directed by Samo M. Strelac in the Croatian National Theater in Split. The drama (Next to)Last Panda or Statistics premiered in the Zagreb Youth Theater directed by Saša Božić. In 2016 he was invited with said drama to the programme of Stueckemarkt at the Theatertreffen Festival in Berlin. He is the winner of five Marin Držić awards from the Ministry of Culture for Best drama text. Awarded texts: L.O.S.E.R.S., (Next to)Last Panda or Statistics, Grand Hotel Bezdan, Stela, the Flood, and Olympia Stadium. In 2018 he publishes his first novel Lacerated Knees.