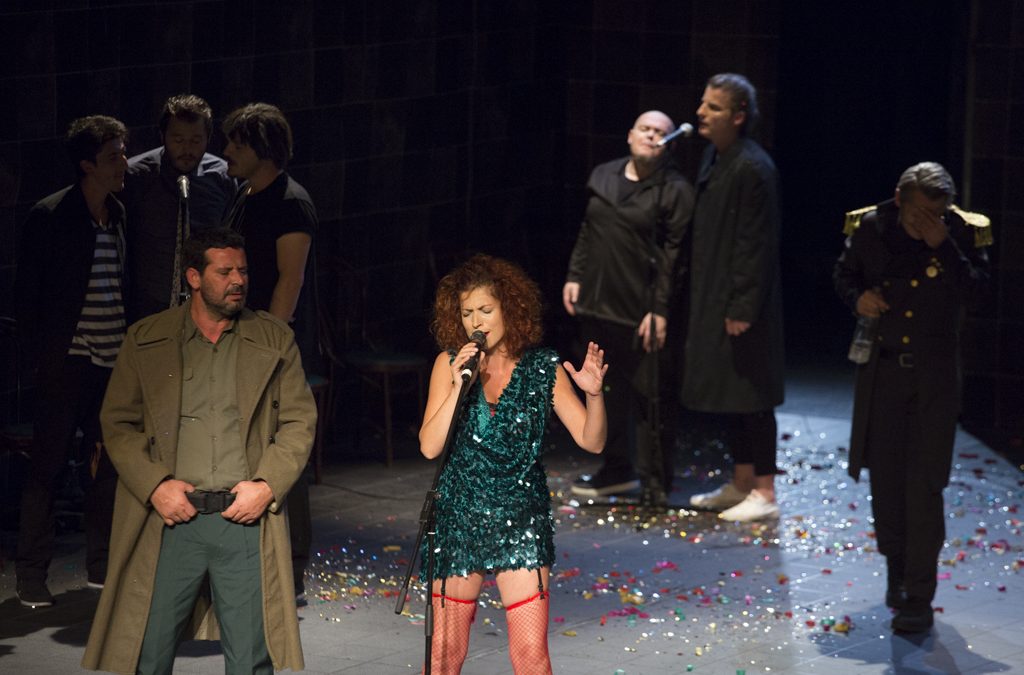 On the seventh day of the International Theater Festival MESS, in the National Theater Sarajevo, we had seen the performance “Bordel Ballkan”, directed by Andraš Urban, and produced by the National Theater of Kosovo. The text author is Jeton Neziraj, the most performed contemporary dramatist from Kosovo. The text by Neziraj text is based on Oresteia by Aeschylus, and it attempts to draw a parallel between the post-war period in Greece and the one from the nineties in the Balkans. He retains the names of characters from Oresteia, as well as the basic line of action, adds some novelty, and places them into a context of a Balkan-style brothel, wherein everybody is a drunk, a hooker, a war profiteer, a former soldier with PTSD, all those who are damaging an already weakened country to the utmost by their lowest desires and impulses. Already, in the text itself, we arrive at the basic problem of the performance – this parallel is functioning very poorly. Wanting the avoid politicking and to clearly determine the placement of this brothel Balkan, and who these people actually are, the text by Neziraj remains generalized and based on the banal metaphor of the Balkans being a place where it’s unclear who is on top of who. Literally and metaphorically. And while in Oresteia, Agamemnon returns back home from war to a country weakened by war, but not directly struck by it – the Balkans had gone through war devastation directly. In that context certain geographical parts of the Balkans can be perceived more like Troy, more so than as Ancient Greece. Already, there begin problems in interpretation, which then continue in a line of logical discrepancies. The example for this is Agamemnon, who as a commandant, has the authority to sell the country to foreigners. Oresteia by Aeschylus takes place in a rounded-out world in which tragic guilt is transferred and the sins of children follow-up with the sins of parents, but where resolution on ground is possible only when the Gods intervene. In Aeschylus’s world, it is possible to establish justice on ground. Neziraj parodies the ending of Oresteia, and his Orest is liberated from the guilt only because we cannot allow ourselves that children of war heroes be marked as criminals. In his Balkan-style brothel there exists no justice, no peace (peace is only then when there is war), and there is no resolution. This intervention is maybe the best part of this text, but the problem is that it is largely unfocused, trying to encompass too many different thematic wholes, and to provide a stance on many different social occurrences, and so it becomes very hard to follow with it, and often times the basic idea is lost. As a whole, Neziraj portrays the Balkans as a place of homophobia and misogyny, a place of violence and primitivism, but the biggest blame for everything is stemming from the evil foreigners who had robbed us and brought “questionable values” like homosexuality, wanting only to rob us of our goods. This kind of stance is a serious problem in the text itself, and then found in the directorial interpretation by Andraš Urban. There isn’t a clear interspace in regard to what the characters are saying, and these stances make this performance, when spoken and performed on stage, homophobic and misogynous, although I wouldn’t say that that was the intention from the authors. Andraš Urban, along with his colleagues, follows-up with the interpretation of the Balkans by Neziraj, as a rough and violent place, full of banality and primitivism, while making his directorial choices – his actors shout slogans by Neziraj in forms of monologues and songs by which the performance is abundant, dressed in flashy, overly designed costumes (costume designer is a famous Kosovo designer Yillka Brada), while trapped between two grey walls (Zeni Ballazhi). A recognizable part in performances by Andraš are songs by Irena Popović – Dragović. By combining war melodies, melodies of stadium-fans, and folk melodies giving off a punk rock sound, and they compose the framework of the performance. The problem is that there are too many, they are used inconsistently, and are aggressively distracting from the main narrative course, to the point where the viewer loses the notion about what is going on in certain scenes, and what their main topic is. The actors are constantly playing in the same intensity – both when they are using the microphone, and when they are playing the scenes with dialogue. The use of microphones beside with the songs is also inconsistently conducted, which cancels out the possibility of development of certain scenes. In some scenes, especially at the very start of the performance, the microphone functions properly, as a type of a payphone booth out from which the characters, like political candidates, are trying to convince us into their stances, while in other scenes it becomes an obstacle, and seems like a solution that was used in the absence of a better one. The need to talk about the Balkans in general terms – through placing primitivism and banality of the post-war every-day in the primary focus, wherein the intellectuals patron selling the country, the commandants are raping and robbing, the women are just traitorous whores, the children coming back from the West return as homosexuals – makes the performance primarily banal and flat, and then homophobic and misogynistic. Although this performance is most certainly important in the context of Kosovo, because it breaks down myths about war heroes and directly confronts with the domineering discourse, in which all of “ours” are good, and all of “theirs” are bad, another disputable matter is the lack of courage and consistency thereby. Maybe it would be fairer to stop hiding behind generalizing and to title it Bordel Kosovo, and to truly make a performance that will thematize the problems of a society in which it came about, instead of clashing with the phantom-like Balkans, which is just a series of common places in this interpretation?