Eichmann in Jerusalem: My advisers said so 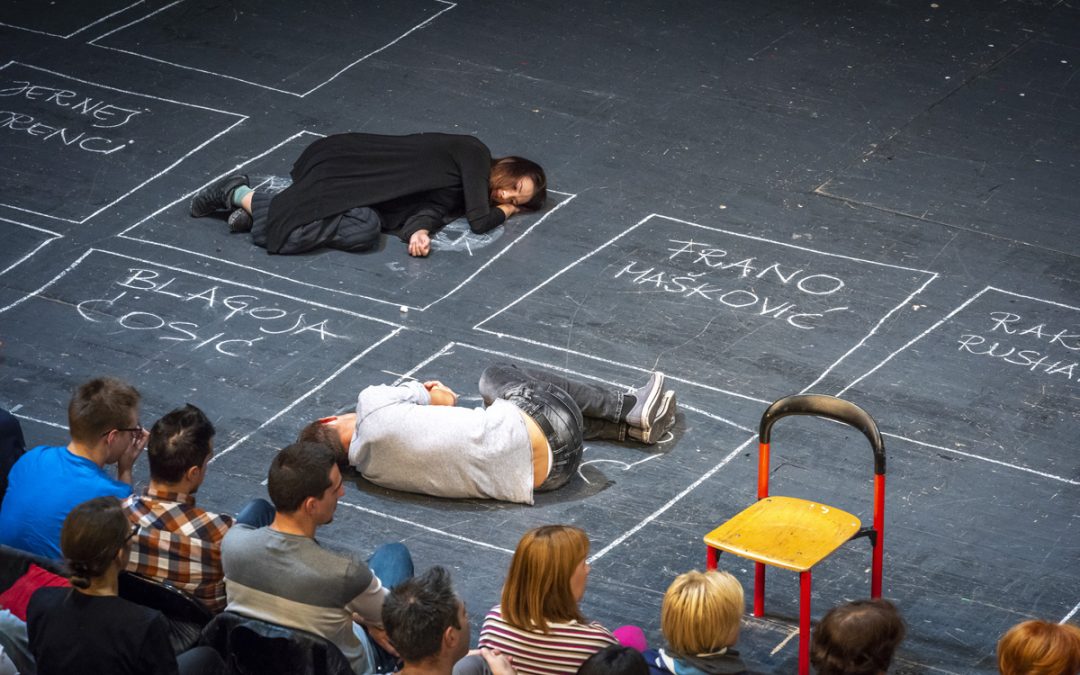 Eichmann in Jerusalem: My advisers said so

Based on the book of the same title by Hannah Arendt, as well as a number of other literary, philosophical, and cinematic works which focus on the Holocaust (Claude Lanzmann’s 1985 monumental documentary “Shoah” was the most inspiring to the ensemble, and is therefore having the largest part of the performance dedicated to it) concieved as a stage essay which, like a whimsical and willful reflection in the mirror, comments on Arendt’s reportage from the Eichmann trials and the idea of the banality of evil he forms in those court proceedings.

What makes our time right for the story of the banality of evil? In “The Origins of Totalitarianism”, Hannah Arendt writes that all explanations of anti-Semitism seem to have been thoughtlessly and fractiously derived in order to cover up a problem that so severely threatens our sense of proportion and hope for mental wellbeing. “One of these hasty explanations is the equation of anti-Semitism with rampant nationalism and its xenophobic outbursts. Unfortunately, the fact is that modern anti-Semitism has grown in proportion with the decline of traditional nationalism and reached its climax at the very moment when the European system of nation-states fell apart and its precious balance of power”, she wrote in the introductory chapter, “Anti-Semitism as an insult to common sense”. Our times are similarly described by Bertrand Badie, a French political sociologist and specialist in international relations. In Badie’s view, with the end of the Cold War, the world had lost its division into two poles and replaced it with a one-pole multicenter structure, as a consequence of the economic integration of the planet. Nationalisms have by no means disappeared, but they no longer have state frameworks. Identities now have infra-state or supra-state reference points, and so there is a new upsurge in ethnic nationalisms the dimensions of which are transnational. Nazism, which she truly despises, in the view of Hannah Arendt, the narrowness of nationalism and the provincialism of nation-states, in the modern world as Badie sees it, could easily develop its slogans. One should not forget the fact that, at the end of the 19th century, anti-Semitic parties were among the first in the world to join together internationally.

Another reason, extracted from the plethora of similar ones, that makes our time right to tell stories of the banality of evil is Adolf Eichmann himself – the “absolute bureaucrat” in the reports of Hannah Arendt. Eichmann personally had nothing against the Jews; he just, following the tact of his ambitions and frustrations, wanted to complete the job entrusted to him perfectly – to send millions of people into death. Able to express himself only by means of clichés, Eichmann had never made decisions, and he would only have an unclean conscience if he did not zealously and diligently execute the commandments of the Final solution. Between the banality of evil and the evil of banality (characteristic of our times) there is a small step, it is enough for someone to obey orders conscientiously and fulfill bureaucratic obligations without making any decision of their own.

Director Jernej Lorenci himself, in an interview with the Croatian weekly Novosti, says that his obsession with evil has lasted ever since he can remember, and that Hannah Arendt opened his eyes to new issues that he did not fully realize: “evil is not beyond man, it is unfortunately, at the center of what we are. From the premise that this great evil is actually human evil, I set out to convey such a statement to theatre.”

“Eichmann in Jerusalem” is a performance of actor’s play, the basic drama unfolds between the actors and the director, who burdened them with intellectually and emotionally difficult material and made them try again and again. Such a conception is somewhat in line with Lorenzi’s idea that “all of life is an unfinished rehearsal, and the premiere, that is, the moment we think we have arrived somewhere, is the point of death of both life and theatre.” The brilliant ensemble (Katarina Bistrovic Darvas, Dado Cosic, Frano Maskovic, Mia Melcher, Pjer Menicanin, Rakan Rushaidat, Lucija Serbedzia and Vedran Zivolic) is constantly on the edge between actro’s play and the preparation for it. The difficult task of each of the actors forces them to remain a concrete person until the end, while presenting several “fictional” characters. The word “fictional” must be quoted, because all the characters mentioned in the play are concrete historical figures, but when the actors revive them with aesthetic means in the fictional field of theater, they are at that moment the product of artistic fiction.

When recently explaining why she defended the Ustasha greeting “For a home ready”, the President of the Republic of Croatia, Kolinda Grabar-Kitarovic, said: “My advisers said so.” The performance “Eichmann in Jerusalem” shows that the issue of responsibility in politics (and not just politics) is crucial, and that after a crime, washing hands is not a moral but a hygienic act. There are no easy answers, and individual responsibility is built into each answer. Besides, there are a lot of Eichamanns today, but Hannah Arendt is hard to find.