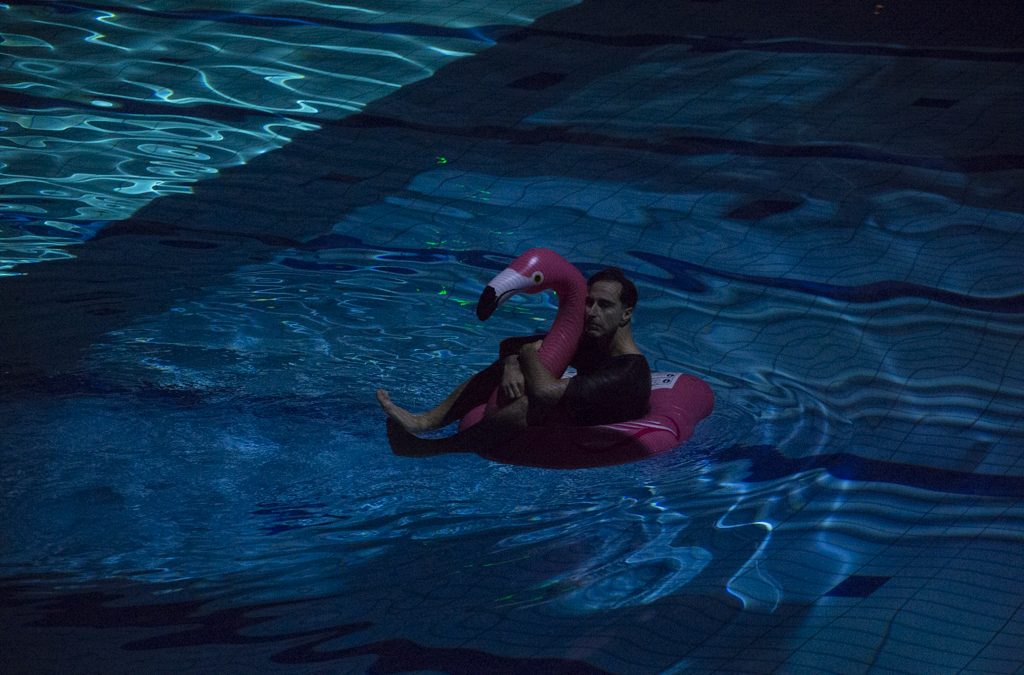 On the seventh day of the Festival, the audience had the chance to see the performance Welcome by director Nermin Hamzagić, and produced by the Association for encouraging and research of performing arts Kontakt. Moments after making peace with the fact that I’m not normal – a pretentious street dog, a festival blogger, and a frustrated eternal student of dramaturgy, afraid of naked women, disliking everything, cut down by my own frustration – I saw this play. So intimate, yet so grandiose, Welcome is a performance that occupies and questions trauma and refugees. The play Welcome succeeds in establishing a performance paradox. It’s not only a huge ambient and visual spectacle, but an intimate, confessional meditation about human suffering. Although very short, 45 minutes altogether, Welcome manages to suck in the viewer into a new world and a specific time, a space for reflecting and empathizing. Welcome chooses a swimming pool as ambiance for its performance. Water is not only a canvas for video projections and photographs (Velija Hasanbegović, Redžinald Šimek), but also a space for play. Although very literal, this metaphor of water develops as exceptionally accurate, when various aspects of trauma relating to refugees are talked about. The performance opens the question of memory and its fluidity. Water determines the longevity of images and the strain of the performers’ bodies. The viewer is faced with scenic suffocation, when drowning is talked about. In the same way, a pool as a public space, secure and protected, open for everybody. That is a frame of water opposite to that of open seas. There are no lifeguards there, to save you in case of a cramp or drowning. This is brilliantly shown in the scene where Ermin Bravo sweeps through the pool, over a projection of human suffering (S. Sontag), upon a pink inflatable flamingo. Welcome is a transmedia play. Set up somewhere on the edges of confessional theater, performance, and visual arts. Dramaturgically, it is organized as the so-called emerging dramaturgy, where in proper intervals, confessions and production of imagery are alternated. The text of the performance stays a bit incomplete, as if a more firm dramaturgical frame is lacking, one that would connect the confessions from different refugees’ experiences. In the same way, the visual material (drawings from a war childhood, a WhatsApp chat history from a sinking boat), as well as theatrical displays, are much more emotionally packed, more suggestive, and they open a wider plane for reflecting. However, I will admit that that is a thing of my personal taste. It is hard to criticize on personal trauma. But I also don’t believe that the problem is that which is spoken out, but the principles of presenting the text, which are at places arbitrary. The fragmented textual template corresponds to the dramaturgy of the performance, but it is lacking internal structure, which would clearly round out this meditation on human suffering. Directing by Nermin Hamzagić is visually lavish, but also subtle in relationships, and manipulating the audience. Especially standing out, is a large image of a woman in a niqab, who – after blacking out the water – says Boo! That is maybe one of the most lucid theatrical responses to the current humanitarian crisis that I had seen, ever since the so-called migrant crisis was conceived. The play’s ensemble is composed from Maja Izetbegović, Ermin Bravo, Sanin Milavić, Amar Selimović, and Boris Ler. I am utterly amazed by watching actors who are open for an experiment, people who are ready to place their bodies into extreme conditions in order to tell a very important, painful story. Although their bodies are strained, physically exerted, diving and at a loss of breath, swimming and freezing, they still achieve concentration, good timing and an atmosphere which can fill out the entire space of an Olympic pool. United, they are dedicated to this intimate spectacle, inviting, only to drown you a few minutes later. I believe that good art, especially theater, is not only a presentation of technical skills. In fact, it’s a thing of elementary professionalism. Good theater allows us to see something new, maybe even for the first time. In the same way, it grants us insight into human nature, which enables us to, if only for a brief moment, become better people – I say, while allowing myself to appear as pathetic. Or at least, a little bit less frustrated. The performance Welcome is one of those performances where – just as in childhood, after a good time playing, or a therapy session – a bit later, it’s as if we can see the world with brand new, more humane eyes. DINO PEŠUT