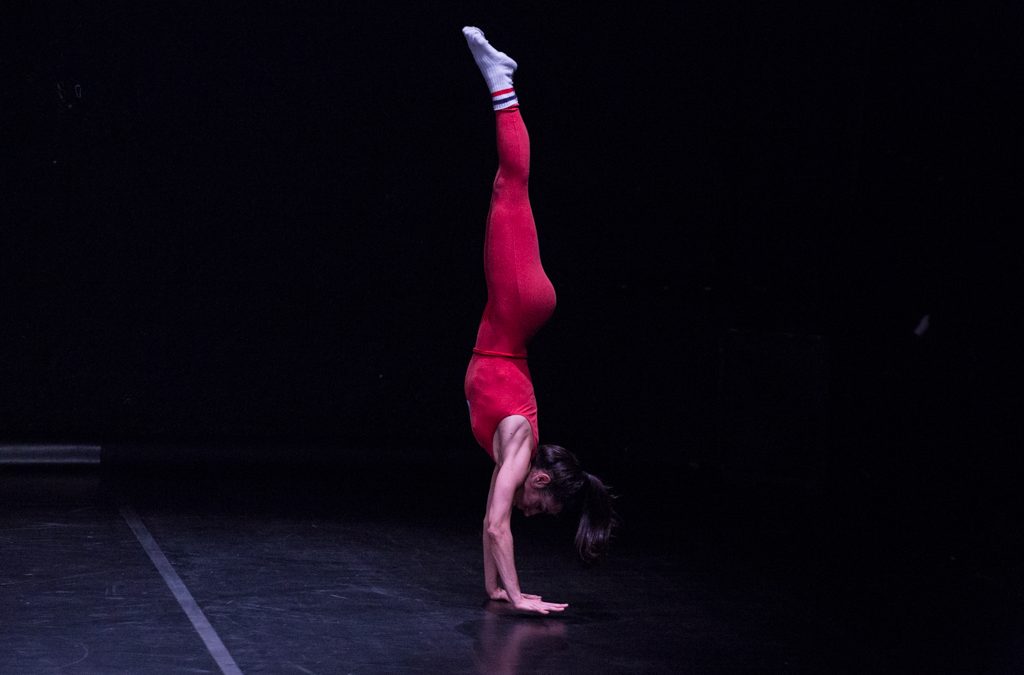 At last year’s 58th edition of MESS Festival, the grand jury award was won by the troupe ColettivO CineticO with the dance performance “Sylphidarium – Maria Taglioni on the Ground”, directed and choreographed by Francesca Pennini. This year, Pennini presented herself with the solo anthology “10 miniballets,” performed at SARTR on October 3rd, at the festival’s competition selection. This is also the third participation of the Italian artist at MESS Festival, at which she first presented herself in 2014, when she won the award for Best Young Director.

“10 miniballets” is a humorous and touching study of the development of a dancer, an artist, based on thoughtful, contrived choreographies she wrote as a little girl in a red-colored notebook. The play thematizes failed expectations, as many recorded choreographies, derived from children’s imagination, are in reality unstageable, even when the peak of physical fitness is reached. Accordingly, failed expectations are the prevalent dramaturgical tool utilized by the author. Emphasis is placed on the relationship between the textual, choreographic template, and interpretation, a performance within which there is always room for improvisation.

At the very beginning, there is a fan and a bunch of feathers on stage. Pennini takes the stage, with a voice recorder playing the sound of strong wind. From that moment on, the audience is encouraged to expect the feathers to blow over the stage. The unusually charming and charismatic Pennini then breaks down the fourth wall, moving from the stage to the proscenium, eventually coming down into the audience. In this way, the spectators are in an interesting way drawn into the consciousness of the dancer, who through narration, introduces the participants to the flow of thoughts of the dancer during the preparation for the performance and the performance itself. Each of the three introductory dance etudes end with a pulsation of light which accompanies the dancer’s breathing. The narration serves as a frame for 10 miniballets, each of which functions as a separate entity. There are no conventions in the beautiful chaos that Pennini creates on stage. Elements of classical, contemporary dance and gymnastics collide with each other, but complement each other as well. Speech, costume, light and music are auxiliary elements that subordinate to the artist’s body, which has been the focus of attention all along, except for one scene. It is a cybernetic machine that processes and translates choreographers’ draft records into a stage language. However, the body, however developed, is still limited.

So, one of the ballets is actually a performance by a drone, which scatters the feather, after Pennini expeditiously and quickly brings out a stage fan, accompanied by Strauss’s aria for soprano. The drone moves together with the rhythm of the melody, which it simultaneously counteracts with its humming noise. This scene, the aforementioned exception where the dancer’s body is missing, has a strong comedic potential, given how it plays on irony and failed expectations. In addition, the scene is both beautiful and magical. The device takes on the role of a dancer, performing a choreography that the human body cannot perform, but can certainly design it and enjoy it.

“10 miniballets” can be seen as a reference to a portrait of an artist at a young age. Although she was able to fulfill her dream and become a quality, renowned dancer, choreographer, director, it is evident that she failed to achieve every of her youthful visions. Still, from witty and humorously presented notes from the notebook, we see an outline of her visionary trait, which has outlived the red notebook, and has come to fruition both through this performance and through the altogether work by the CollettivO CineticO troupe.