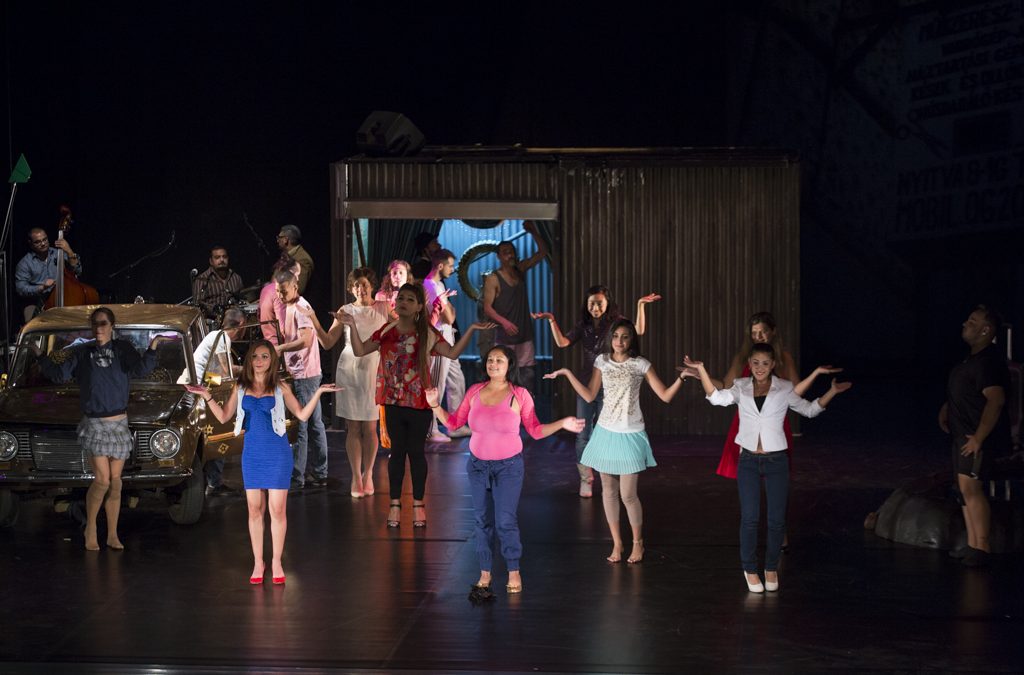 The performance “Open for Everything” by director Constanza Macras, produced by Constanza Macras, DorkyPark, and Goethe Institut opened (as symbolically suggested by the title itself) the 58th International Theater Festival MESS. Exploring communities of the Roma, their different ways of life, customs, songs and dance styles, the director brings us forward a semi-documentarist display that speaks about them in an interesting and receptive manner. At the very beginning, the viewers are welcomed by an atmosphere of a Roma settlement – the credibility of which is supplemented by an authentic scenography (by Tal Shacham). An automobile with symbols and colors of the fashion brand Gucci from which around fifteen actors exit; a tin structure that represents a “house”, and what can be seen from behind the doorpost is a statue of Mother of God with Jesus in her arms; as well as costumes (by Gilvan Coelho de Oliveira) – will subtly, and in doses merge along with other scene elements during the play and contribute to the deconstruction of the experience of kitsch and the understanding of kitsch as part of freedom when thinking inside the frame of the Roma population. While amazing musicians are entering, playing already is the song Đelem, Đelem beginning with the lyrics “The Roma have their roads open”. In front of us, at the very start, from an unrestrained crowd there becomes a community. Unrestricted, fresh and above all – alive, uncensored, without limits and socially accepted norms that we are not only living as part of, but just trying to do so. This absolutely synchronized chaos, perceived by the eyes of today’s man, is disrupted by a foreigner – a traveling Chinese woman with a map and suitcase. A series of questions are asked successively, and they are a strong and impressive introduction into the prejudices we uphold. “Are you afraid of water?” “You don’t shower so often?” “Do you have a written language?” “You don’t switch outfits?” “You move constantly?” “You burn things?” “You pray to a full Moon?” “How many of you are there? 100? 300? 500?” “Do you follow up with the Gypsy code?” “Do you interpret cards?” “Do you elect a Head Gypsy?” This fact that these types of questions are asked from the Roma is chosen by the director as a starting point for a parodic-critical relationship primarily toward the all-present condescension, and discrimination of today. Falling into the trap of affirmative action in today’s time is mostly our relationship and experience of the Roma, because we are trying to “save” them from themselves, from their culture, their lifestyle. We are trying to save them from freedom. Through visually, musically and choreographically exciting  solutions for the stage, that alternate with the documentary material in the form of personal confessions from individuals, the director managed to make a play that problematizes the contemporary meaning of the specific discrimination toward the Roma, the prejudices that they encounter at each step and showed us that that conflict especially – of our civilization with the Roma community is in fact a clash of two cultures, and not our attempt at “cultivating them”. Singing, dancing, quarreling, laughter, fighting, love, company, conversation, flirting, relationships, no rules to behavior, freely expressed emotion. All of what we are calling primitivism today, and by sacrificing it we had entered the category called “Discomfort in Culture” by Freud. The refusal of being robotized, of sameness, the molds and limitations are reasons for which the Roma are in a constant position of “second-tier citizens”, unaccepted and maladjusted. The director deconstructs the term freedom that we have masked during the centuries under the influence of various social-political events, wars, territorial conquests in the broadest sense possible, so much so that we have forgotten what freedom means in its original sense and we will never reach it again, because we had in fact given it up willingly. We are closed up inside the paradox – while we are truly missing it and while we are constantly aspiring up to it, along the way we are setting boundaries and obstacles under the disguise of culture and the civilized world. The superficial atmosphere of kitsch is just the tip of the iceberg of this ambiguous performance. At the same time, it is a display of the cruel reality for the Roma community and the relationship toward the Roma and a tragic story about us and the absurdity of our prejudices, which opens an essential question – where are we going on civilization-level? Where are we headed?
Stela Mišković was born in Cetinje in 1977, where she graduated from her full-time and specialist studies at the Department of Dramaturgy at the Faculty of Dramatic Arts. During her studies she was a participant of Sarajevo Talent Campus as part of Sarajevo Film Festival and she was awarded best student at the Faculty of Dramatic Arts by the Bureau for Scientific, Educational, Cultural and Technical Co-operation of Montenegro. She worked as a dramaturge, assistant dramaturge and an author of dramatization on plays: “Eggs” by Nick Upper, “Fisherman’s Brawls” by Ana Vukotić, “Fathers did Build”, “Fifth Park” and a multi-award winning performance “Guardians of Thy Honesty” by Boris Liješević, “Women Cleaners” by Selma Spahić, “Return” by Mirko Radonjić, “One Flew Over the Cuckoo’s Nest” by Diego de Brea, “Wedding” by Egon Savin, “About Mice and Men” by Dino Mustafić and other. As part of the festival Barski Ljetopis 2017 she wrote her first dramatization of the novel “Wuthering Heights” in the Balkans and she was a dramaturge for the play of the same title directed by Dora Ruždjak Podolski. She is a screenwriter and co-screenwriter for films “Angels and Trucks” (by Srđan Stanojević), “Little Ninja” (by Milutin Darić), “High Art” (By Milana Jovanović), “Film in Color” and TV drama “Engagement” (by Milutin Darić) and “Weight” (by Zoran Pribičević), all of which were shown at festivals in the Balkans. In 2016 she won the competition by RTS with her scenario for a children’s programme “All is a Fairytale”, which started airing in March 2017 on the same television channel.