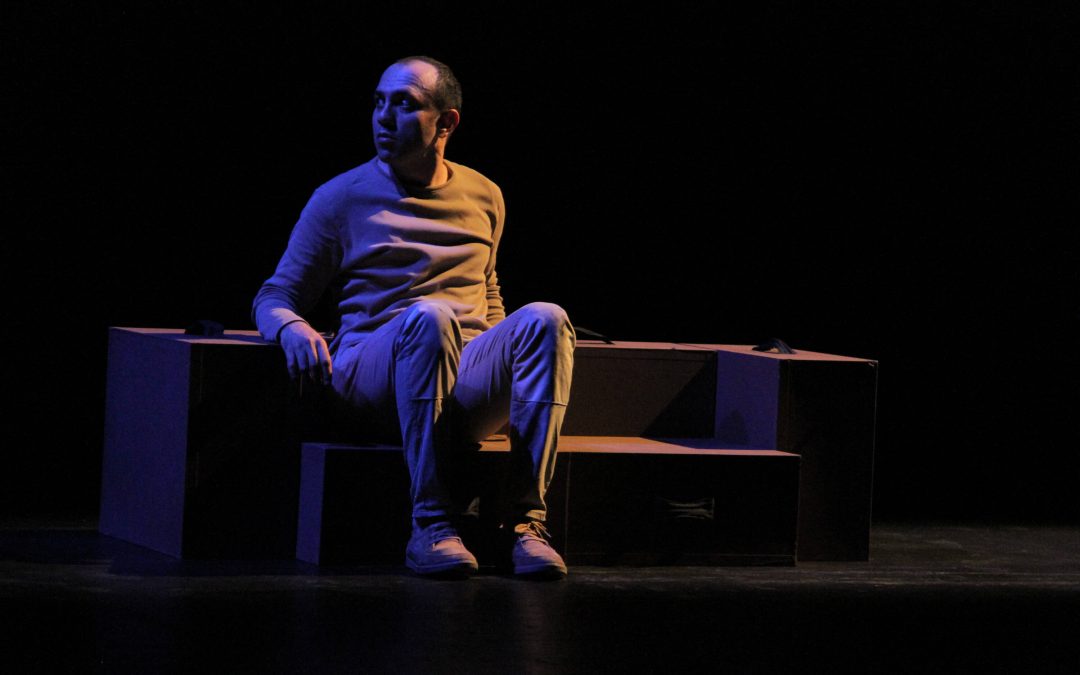 The play “Immortality” directed by Nima Dehghan, produced by Experiment Theater Group from Iran, was performed in the Youth Theater Sarajevo on the sixth evening of the 58th MESS. “Immortality” ends with three questions written out on a video-wall: “Do you know how many refugees die on their way to Europe?”, “Do you know how many of them died while you were watching this performance?”, and “Do you know how many children died on the migrant route?”. Why did the point of the forty minute performance have to be directly written out for the viewers? The performance “Immortality“ was announced as a story about a man tired of his ordinary life style and the war going on in his homeland. He dreams of journey. And he emigrates in his dreamland. But, he faces some obstacles in this way… By combining sound, video, and pantomime (a very interesting performance by Farzin Sabooni) the play “Immortality” in fact speaks on barriers (those natural, social, and political), which migrants from the Middle East have to overcome on their “way to freedom”. In the beginning, the main character of the play is trapped in a senseless existential situation, which is displayed through pantomime, by repetitive simple action. His decision to travel turns on the camera. From that moment onward, the viewers see the character on a video-wall as well. From the bird’s perspective. The character is shown as part of a fantastic world that functions by logic of an animated film. Like the coyote from the cartoon “Road Runner”, which ever plan he might have, the character of the performance “Immortality” doesn’t make it to the EU, from episode to episode. The two perspectives from which we are seeing the character picture the contradiction between the two worlds presented. While Farzin Sabooni flounders on stage, caught in a net of the meaningless everyday, up on the video-wall a line of his trips are to be seen, each ending as nightmare. You could say that the play’s character is trapped inside the contradiction between meaningless reality and fantasizing about a liberating journey, if only the ones travelling weren’t dying so often. However, all of this isn’t articulated enough, and the unclear articulation is reason why the point of the performance is written out upon the video-wall, at the end. There is a great possibility that if the three questions noted at the beginning weren’t asked directly – the viewers wouldn’t notice themselves (although, probably even before the play they were aware that people are dying on the “migrant route”). Without the three questions we would, for example, while being a bit cynical, conclude that before us is a coward who is afraid to engage on a trip to Europe. Three questions asked at the ending are literally writing-in meaning into the performance. If talking about theater as a system of signs, we could say about the play “Immortality” that it is hermetic. So, the semantics of that system of signs is hardly understood. Since language, through a completely banal revelation that language signs are arbitrary, stopped being considered a medium of communication, it has shifted from a medium for exchange into an autonomous subject. A condensed and layered medium, language is capable not only to reflect on, but also to radically transform reality. Language informs, but on the other side, it also creates what it informs about. Its characteristics are not necessarily identical with the characteristics of the outside world which it seemingly describes. Philosopher Paul Grice defines communication as listener’s recognition of speaker’s intention. Communication is a collaborative effort, and as such it has to comply with certain determined rules and principles of conversation. When he starts listing these rules and principles, Grice sounds like a comedian being overly ironical. This comedy is being somewhat moderated by Iris Murdoch, who says that language as exact communication seems only possible in a circle of which is common between people. If it’s not cared about the conventionality of means by which a message is conveyed, there exists a danger that the meaning of the message gets warped or banal. This is also the case with play “Immortality”, which after some forty minutes of its banal performance, asks us why we have come to the theater. EDIN SALČINOVIĆ