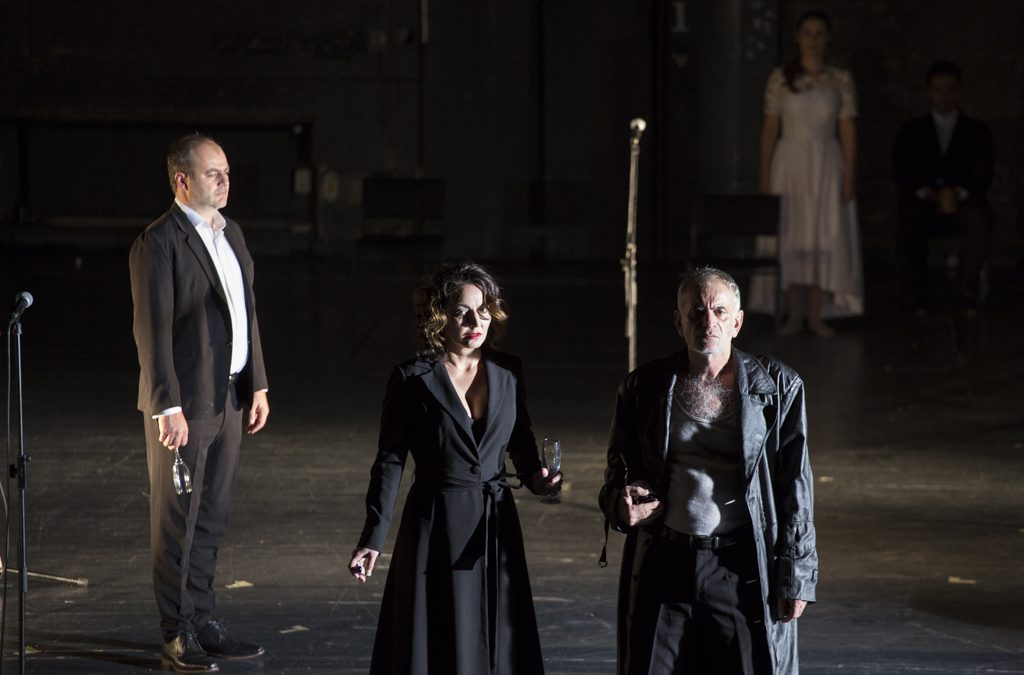 Playing on the third day of the festival, was a performance King Lear directed by Diego de Brea. The performance was co-produced by the National Theater in Sarajevo and MESS Scene. I will allow myself a more personal approach to this theatrical critique. Primarily because there is not a lot of material for analysis and interpretation, and I usually avoid evaluations. Namely, the performance King Lear is boring. And it is boring because there is nothing to help it become less boring. There is not some exciting directorial reading, no inner dynamics, no ravishing play from the ensemble or some type of inner world of the characters, and no theatrical imagination. Ultimately, there is not even significant directorial skill to define the performance, at least in a compositional sense. The play is chronically lacking of a sense of rhythm. But, there are microphones. The problem with microphones in the play King Lear is there because they are static, and in place of some kind of directorial solution. And since this creates a certain arbitrariness in the use of the technique, conceptual justification is missing. Namely, any logic is lost very quickly to the use of microphones, and what is left is an unfinished radio drama, on stage. The actors are left, due to lack of concept, speak in general in efforts to create any kind of inner world. The adaptation does not help in the understanding of the play. The result is very draconic and it attempts to focus on Lear’s madness, but so many times it deters into various directions, that a coherent narrative line is almost completely lost. Appearing before the ending of the play, out of nowhere, is a metatextual part which bring in Beethoven. I hadn’t recognized the citation, so to compare it to any similar dramaturgical treatment. The other problem of the play is more contextual. It is hard to resist the impression that the world of the play is completely immune to the present social moment. It is very hard to listen and watch such explicit sexism, happening on stage. And truly, wouldn’t it be easiest for Lear to reach out for sexism, not to say misogyny? And just now, isn’t the moment right to at least offer a more exiting reading? The play insists on Lear’s possessive madness being perceived as touching paternal behavior. Women are in fact wolves with beautiful hearts, venomous. The last scene leaves us with certain questions. The two women with tight spandex suits and high-heel shoes are burying their father while still alive. I wouldn’t like to go too much into interpreting this costume by Blagoje Mičevski. I wouldn’t like to appear as conservative. But, why are women the ones who need to physically dress down, whenever there is a hint of emotional stripping? Why shouldn’t men be treated the same way? (I’m asking this, indeed, for a friend) Or why don’t we have logical questions instead of dramaturgical excuses? Let’s say, have Regan and Goneril any human qualities, are they suffering, how does separation affect them, and how does their father’s mistreatment affect them? I don’t like writing negative reviews. Especially when I see untapped potential. Let’s say that Izudin Bajrović is a great Lear. And it would certainly be a joy to watch him being given a second chance to play on stage along with different partners. This way, he is a great Lear, who is trapped inside a radio drama. A thoroughbred dramatic actor closed up inside a radio studio. However, his Lear is concentrated and interesting, one with authentic madness and endless misfortune. It’s important to note the other actors in the ensemble: Sanela Pepeljak, Mediha Musliović, Slaven Vidak, Vedran Đekić, and Elma Juković. The ensemble has pulled all efforts in order to maintain concentration, to produce an atmosphere and an inner world, although little space is provided for play and imagination. Because of them, the performance didn’t manage to bury me alive too.

Dino Pešut was born in Sisak in 1990. He studied Dramaturgy at the Academy of Dramatic Arts in Zagreb, and in 2017 he graduated from Master studies of Dramaturgy, specializing in dramatic and cinematic writing. He is working as a dramaturge and a director in Croatia and abroad. As a dramaturge he most often collaborates with director Selma Spahić. From their collaboration, notable plays are The Master and Margarita (Croatian National Theater in Rijeka, 2016) as well as 1981. (Slovenian National Theater in Maribor). As a dramatist he debuted with the drama The Pressures from My Generation directed by Samo M. Strelac in the Croatian National Theater in Split. The drama (Next to)Last Panda or Statistics premiered in the Zagreb Youth Theater directed by Saša Božić. In 2016 he was invited with said drama to the programme of Stueckemarkt at the Theatertreffen Festival in Berlin. He is the winner of five Marin Držić awards from the Ministry of Culture for Best drama text. Awarded texts: L.O.S.E.R.S., (Next to)Last Panda or Statistics, Grand Hotel Bezdan, Stela, the Flood, and Olympia Stadium. In 2018 he publishes his first novel Lacerated Knees.