Naked and suspicious, in search for the animal within 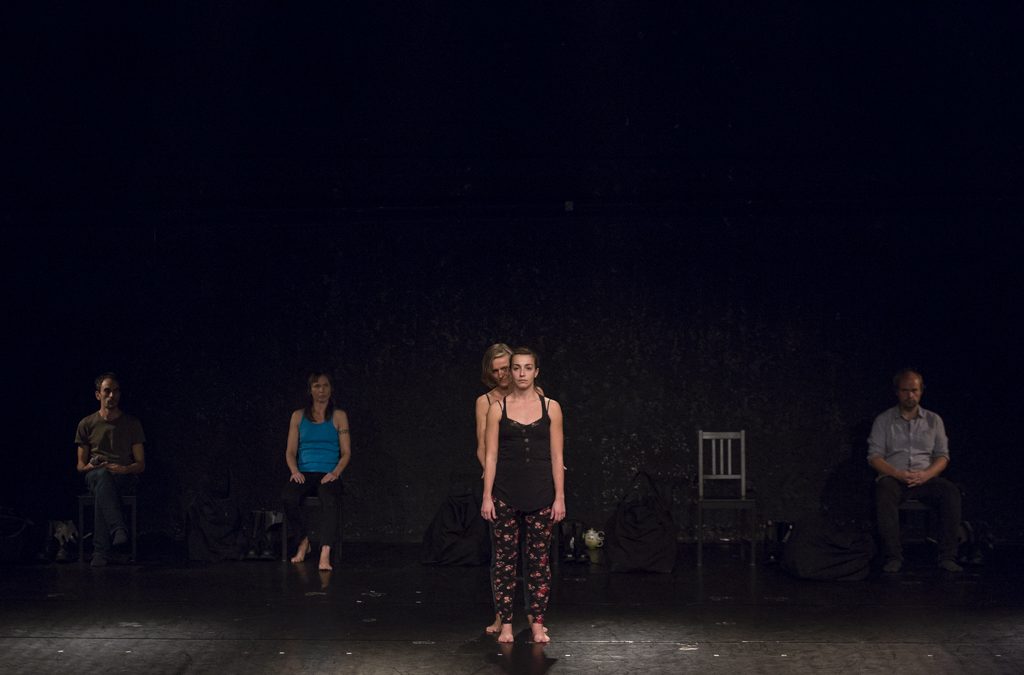 Naked and suspicious, in search for the animal within

Critique of performance THE NINTH, Via Negativa, Ljubljana, Slovenia
Critique of performance THE NINTH, Via Negativa, Ljubljana, Slovenia Sarajevo War Theater SARTR, Sep 29th 2018 Performance The Ninth from Ljubljana-based collective Via Negativa was the second performance of the first night of the 58th MESS Festival. In The Ninth five actors and actresses explore what is left of the animal within man, and what differentiates him/her from his/her animal cousins. Have the human civilizational advancements finally make them conquer the animal within, or does man still remain a naked, scared and suspicious beast after the great step forward? The musical background, but also the aspect which, through its emphasis (sometimes even above the level of sound tolerance) dictates the rhythm of the entire performance, is The Ninth Symphony by Ludwig van Beethoven. One of the most famous compositions in history, with its fourth part declared the hymn of the European Union, as one of the greatest artistic accomplishments of the Western civilization actuality becomes a driving-wheel moving and taming the five performers on stage. The performance is divided into four parts, in the same way as The Ninth Symphony. At the beginning of the first part of the performance titled Ethos, Loup Abramovici, Grega Zorc, Jaka Lah, Anita Wach, and Magdalena Tuka enter the stage almost neutrally, with big bags and in their private clothes that they will soon take off each other. They present each other to the audience as pure-bred horses at the races with names of our primordial desires: Freedom, Hope, Second Chance, Happiness and Spirit(uality). In the second part, titled Logos, the actors and actresses, accompanied by a video-animation in the background, alphabetically pronounce almost all words ending with a suffix – ism. All political ideologies, artistic directions, scientific doctrines, philosophical currents, and religious dogmas are put inside the same basket. By skillful movements of the actors who are throwing stage items at each other while saying words like slogans, and actually showing that each of those directions, doctrines, and movements during the development of human thought only brought about new victims, every one similar to the other – and that their authors are not only mutually equating opposing socio-political doctrines (for example: fascism and socialism, communism and capitalism), but they are also comparing them with truly harmless artistic directions (formalism, realism, naturalism), as well as lifestyles (vegetarianism). However, the terms starting with “i”: industrialism, instrumentalism, intellectualism, as well as internationalism, got a special place in their listing, all with their definitions, because they most honestly represent the essence and aspirations of modern society. In Pathos, the third part of the performance, in which the musical tension grows as we move forward up to The Ode to Joy, the grand finale of The Ninth Symphony. The five actors are sitting on stools and cheerfully tapping along with the rhythm of the music into the future, only to become completely still taking-up festive-formal poses, and then again getting into motion while carried away by music. However, maybe the most interesting sight from the performance comes at the transition from the third to the fourth part, when the five actors, with their feet tied together between them, appearing like a giant animal, get up from their seats, with a teapot and a cup, and with clenched hands without thumbs, like hoofs – they pour tea. Just in this image we best see the tamed animal spirit that is crying out for liberation, which will never come about, not even in the fourth part titled Equus. The actors with masks in shapes of horseheads cry out, then they leave those masks like shed skin around the stage, while they change into formal attire of civilized Europeans. During the performance, the actors and actresses show an exquisite thoughtfulness, and focus, especially in the static images – transitions, maintaining the audience’s attention, and raising tension by minimal movement and gesture. Although, the play’s set-up is way too formal and didactic, at times even obnoxious, deafening by loud music and lighting effects, when pronouncing big words and when making big moves, and without a clear vision that we should carry-out at the ending along with us.
Bojana Vidosavljević (Sarajevo, 1987). Graduated from the Academy of Performing Arts, Department for Dramaturgy. Works as Assistant on Subjects from the area of Scriptwriting at the Academy of Performing Arts in Sarajevo. As part of her theatrical career she is responsible for dramaturgy and directing for the play “Canary Soup” (ASU Sarajevo, BNP Zenica), also a dramaturge and co-author of dramatization for the play “The Secret of Raspberry Jam” (SARTR, directed by Selma Spahić), the dramaturge for the play “Assembly” (NP Sarajevo, Chamber Theater 55, SARTR, directed by Selma Spahić), a dramaturge and script co-author for the play “The Hen” (MESS, directed by Selma Spahić), a dramaturge for play “What is Europe” (MESS, directed by Andraš Urban), co-author of dramatization for the play “My Factory” (BNP Zenica, directed by Selma Spahić), as well as the author of dramatization and a dramaturge for the play “Brave New World” (Youth Theater Sarajevo, directed by Dino Mustafić). She is a winner of the Special regard by the Jury for dramatization at the 53rd MESS Festival, as well as the award for Best dramatization at the 13th BiH Drama Festival for the play “The Secret of Raspberry Jam”, and the award for Best dramatization at the 16th BiH Drama Festival for the play “My Factory”.