RAMBUKU AND THE WESTERN WALL 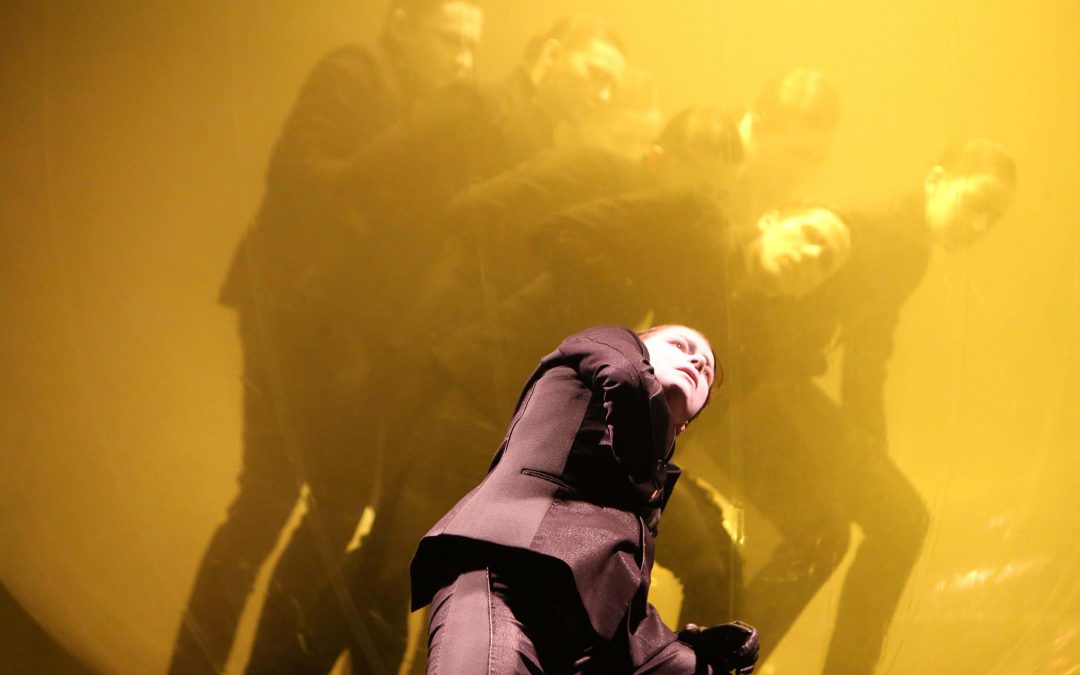 RAMBUKU AND THE WESTERN WALL

On the second day of the 58th edition of the International Theater Festival MESS, the audience had a chance to see the play from the National Theater Mihai Eminescu in Timisoara titled Rambuku at the Main stage of the Bosnian National Theater in Zenica. Last time the director of the performance, Mihai Măniuţiu was a guest at MESS in 2005, presenting the performance Elektra from the National Theater Radu Stanca in Sibiu. In each of the works, the text of the piece is the basis for a mostly chorographical and musical exploration of the basic topic from the dramatic template. Rambuku, a drama piece from Norwegian Jon Fosse, one of the most performed dramatists of today, had its premiere in 2006 in Norwegian theater. In the piece, Fosse utilizes simple, repetitive and somewhat poetic dialogue, while the narrative element is minimal – a man and a woman in a living room are waiting for a mysterious stranger Rambuku, who will take them to a land of the same name, about which the woman tells the most fantastic tales. The result is a quasi-Beckett-style atmosphere, with a significant addition of mysticism and a problematic display of male-female relationships, which are the characteristics of a great piece from Fosse’s creativity. As in one of his most famous drama pieces, Nightsongs, the male character is tacit, silent and inert, while the female is hysterical, talkative, and attention-hungry. Măniuţiu’s staging of Fosse’s drama piece skillfully evades slipping into the banal mysticism and perpetuation of gender stereotypes. That is done by adapting the drama in the context of genocide of the Jews in World War II (the author of the adaptation is Anca Măniuţiu). Given that Fosse’s Rambuku (that can be considered a place, and also a person) can be read as a mythical metaphor for death, Măniuţiu takes it a step further in that interpretation, breaking down the last hints of realism in the text and transforming the stage into a metaphorical waiting room for death. This context is not reached by changing the original text (besides a well applied dramaturgical modification), but by utilizing musical and visual scenic ques. The main element in scenography is the wall, i.e. the backdrop that moves, assembles and disassembles as needed, and it symbolizes The Western Wall. The motif of water appearing already in one of the first scenes, when the female protagonist is sitting in a tub, under a rusted showerhead, an effective conclusion is reached in the ending scene of a mass shower, the allusion at a gas chamber in which mass extinctions of Jews were done. All of this is intertwined with choreography, the primary purpose of which is not the convection of meaning, but emotion. In the chorographical points, especially standing out, through skill, is a dancer and choreographer of the play Andrea Gavriliu, who takes on the role of Rambuku himself in the solo points. Unfortunately, the terminal repetitiveness in the group choreographies, as well as in scenic solutions (constant assembly and re-assembly of the backdrop, numerous passages of the female protagonist and the dancers by her side), for which you could say is the physical equivalent of the repetitiveness of Fosse’s replicas, instead of evoking a scenic ritual, after some time it appears as redundant and tiresome. And the impressively designed lighting (Lucian Moga), with a row of reflectors set-up beside the top of the backdrop, eventually loses its initial effect. Some of the scenic images are beautifully composed, but too often, this beauty seems to be its own purpose, and in being so, it seems kitschy, giving an “aura” of obsolescence to the performance. Dario Bevanda (Sarajevo, 1985), a dramaturge, dramatist and scriptwriter. Some of the plays he had worked on are: “The Secret of Raspberry Jam” (Sarajevo War Theater, 2013 – a Special regard from the jury for dramatization and dramaturgy at the 53rd International Theater Festival MESS, an Award for best dramatization at the 13th BiH Drama Festival in Zenica – Sarajevo), a theatrical omnibus “At the Edge of the Universe” (National Theater Sarajevo, 2013), “Assembly” (National Theater Sarajevo, Sarajevo War Theater, Chamber Theater 55; 2014), “The Hen” (International Theater Festival MESS, Youth Theater Zagreb, BITEF Theater; 2015), “The Master and Margarita” (Sarajevo War Theater, 2016), “The Crocodile” (Croatian National Theater Varaždin, 2017) and “Romeo and Juliet” (Bosnian National Theater in Zenica, 2018). His drama texts had stage readings in Croatia and Austria. He writes critique for film, theater and music.