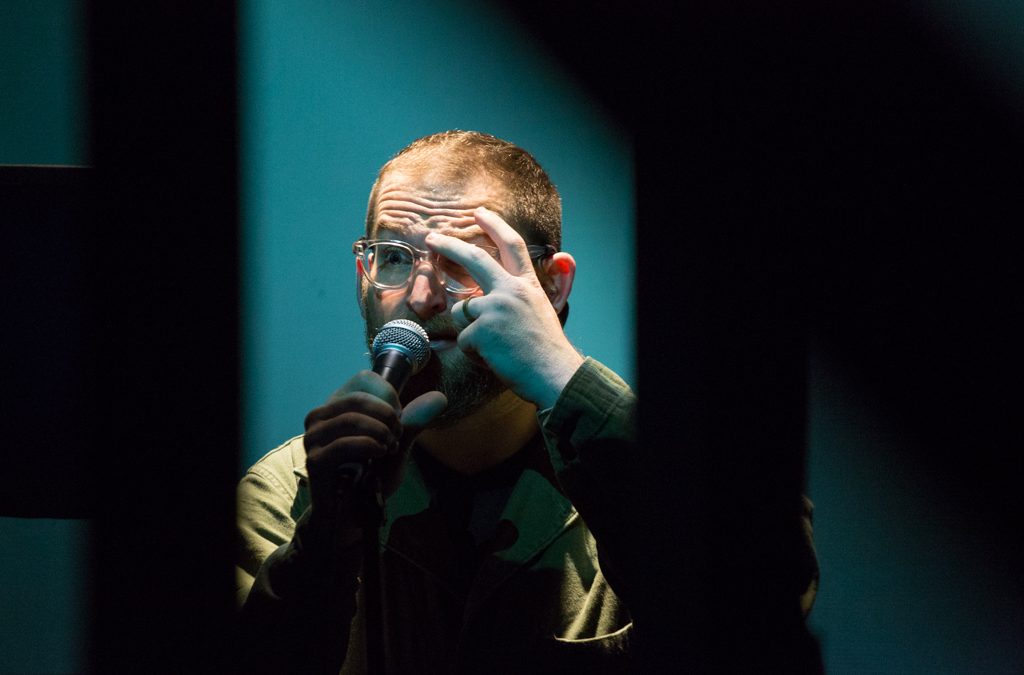 The performance Remnant, by the American collective at MITU Theater was performed at the Academy of Performing Arts on October 1st and 2nd, as part of the MESS Competition Program.

It’s actually really hard to formally define this work, because it shifts between installation and performance, but its thematic focus is clear – Remnant is about death. That which remains, as how they say in the performance itself: “And finally, the word REMNANT can mean: living trace – for example, trace of the past.” The collective strives to speak about these traces from various aspects, using interviews conducted with surviving soldiers, people whose loved ones died from serious illnesses, paragraphs from the Mahabharata, fragments from Egyptian mythology, and the music they wrote and composed themselves.

The scene itself is constructed in the form of three connected boxes, the walls of which in some places are transparent and sometimes serve for projections, but their primary purpose is to separate the space of the stage and to provide some sort of distance between the actors and the audience. In each of these three boxes, a fragment of the story takes place. Three stories are taking place simultaneously, each in its own space and each lasting 20 minutes, as the audience moves around them, thus having the opportunity to see all three fragments. The fragments are almost completely separated, with only one part where story A and story B overlap.

And most importantly – the audience watches the performance with headphones, through which they, along with the actors’ voices, also hear sound effects that complement the monologues, musical scores or the storyline, and that are not heard without the headphones. Each of the actors has a bug through which they hear sounds and director’s input, making this performance very complex – all three stories must start and end at the same time and each part of the performance must be perfectly precise in order for fragments A and B to intertwine at exactly the right time, but also to have all the actors perform their part which requires sound effects.

The space itself is sterile, simple and cool, as are the costumes of the actors and the design of video projections that are reminiscent of some science-fiction movie where the action takes place in a space station, dating from the 1990s. It makes the story of death seen from a distance, like a phenomenon which some forensic scientists dissect to reach its essence.

However, it is difficult to find a clear link between fragments A, B, and C, that is, to justify the positions from which the concept emerges for each of them. Fragment A is dedicated to war veterans. It combines stories and experiences from the battlefield and stories about PTSD which follows afterwards. Fragment B is conceived as a form of a radio show, whereby the show host reads us paragraphs from the Mahabharata, more specifically, a paragraph about a man’s need to fight for something. Here, war is thematized like a battle for life, and thus overlaps thematically, that is, supplementing fragment A. In fragment B, the emphasis is placed on the experiences of people who have lost someone due to a serious illness and their struggle with loss. In addition, there are musical scores and text parts in each fragment that are not closely related to the underlying theme of the fragment. This makes the performance difficult to follow because it is actually based on associative lines, which is at odds with the precision of the performance process, and so the viewer often struggles to find the key for reading each individual fragment and the interconnection between them. On the other hand, this is exactly where the charm lies – the arbitrariness of content in relation to the rigidity of form. Because, isn’t life itself exactly the same – basically the same if it is understood as a biological fact of the matter, and infinitely varied in content in relation to how we individually shape it to be?

Perhaps the key to understanding this performance is easiest to find in the very creation process utilized by the MITU group. This collective calls its rehearsals creation classes, to which each of the members arrives without any particular task and spends time developing some individual work of theirs. In the end, they choose the one that appeals to everyone the most, and based on it, they create a collaborative piece of work, each of them introducing their own creation. And it is this process that is clearly visible in the performance Remnant, which does not always support it because of the lack of focus and arbitrariness from the shift from one segment to another.

Still, the group manages to round up each of the fragments, narrowing them down to what is perhaps the most important in this story cluster – the story of time. By reducing it to mechanical time, one minute time, which applies the same for everyone; war veterans, people sitting next to a dying person’s bed, a scientist sitting and staring at the stars an us, the audience watching a performance about death at that exact moment, MITU lets us all experience our own subjective sense of time and its transience in this minute of silence and stillness.

The decision to have the performance seen with headphones also stemmed from the content of the play itself, and therefore this plan makes full sense and with the narration of the sound the whole performance begins and ends:

“The balance of the senses in your mind is constantly changing. Take this room as an example – as light fades, the brain hardly processes its absence. If you sit in the dark long enough, you begin to see colors. Thin lines, spots and dots. All of a sudden, your hearing sharpens. Tibetans believe that hearing is the last sense that is lost. And in darkness – whether literal or spiritual – the only thing that remains is to find light – and to listen. “

Just as with the decision to isolate the sense of hearing and place a special focus on it in the performance, so from this passage some of the visual solutions in the play emerge – the lines become blinking animations. The technology was simultaneously used as an attempt to abstractly illustrate some concepts and to create an atmosphere thereby, but also as an attempt to create distance. At some moments, MITU groups succeeds in this, while at others a decline in content quality is noticed.

There is also the question of the justification of the overall concept with respect to its content. While some solutions, such as separating sound with headphones and some video material, are entirely justified, the overall impression is that the concept of this stage event can easily be applied to a wide range of other ideas. The mastery of technology and the precision of actors’ play of the entire ensemble are certainly why this work should be seen at and in which lies its highest quality.