Sardinian Macbeth in spectacular conjunction of horror and humor 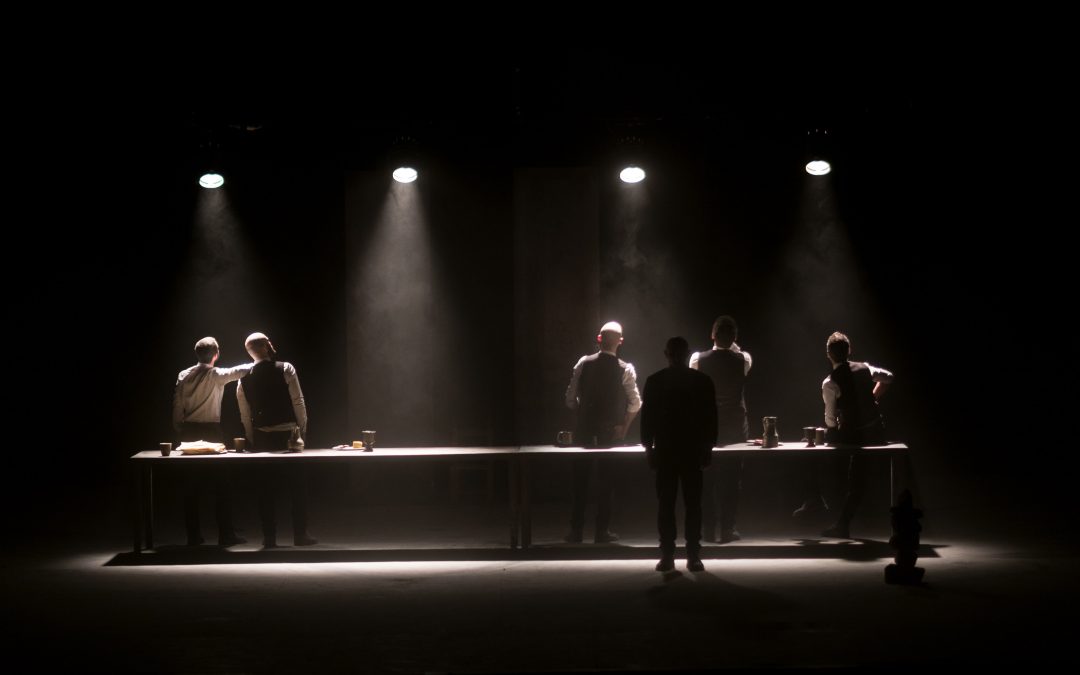 Sardinian Macbeth in spectacular conjunction of horror and humor

On the fifth night of the International Theater Festival MESS in the National Theater in Sarajevo, we had a chance to see the performance Macbettu from Italy, coproduced by teams Sargadena Teatro and Compagnia Teatropersona. Macbettu is, as you could guess, Italian, precisely Sardinian for Macbeth. Alessandro Serra, director (but also a scenographer, costume designer, as well as a lighting designer for this play) – he skillfully places Macbeth into an autochthonous ambiance of a Sardinian carnival, which is most apparent in language, but also in suggestive music (composer Pinuccio Sciola), scenic movement, as well as the costumes chosen. The performance has stayed completely loyal to Shakespeare’s drama, and thanks to the precise treatment, dramaturgy is strong and condensed, and it makes room to excess which shifts attention from the actions on stage, if only for a moment. Adding to the overall distinctiveness, is a melody coming from the spoken replicas, which is reached by the adaptation of language of Macbeth to the Sardinian dialect of Italian. All listed choices for the concept created, result in an authentic atmosphere of this play. Macbettu is at the same time tragic, bloodied, and in almost all senses intertwined with brutality, tyranny and fear, while simultaneously being – especially in the scenes with witches – light, comical, and with “slap-stick” elements of actor’s play, and also skillfully balancing between grotesque humor and horror. During all this, the exquisitely thought-out mise-en-scène of the performance remains perfectly precise, although some comical etudes at times seem like outrageous improvisations of acting. Extraordinary directorial solutions sometimes appear very lucid in their simplicity, like the little wooden chair which symbolizes a throne, on which Macbeth is rocking during the ending monologue, or the rocks which Macbeth is stacking up, as if he was erecting a loose-standing monument with each new murder he commits. At times these scenic solutions are unforgettable, like the scene of Duncan’s death, where the corpse is removed from the scene after the committed homicide, by pulling a sheet from under it that was set-up by Lady Macbeth, as if leaving a huge bloodied trace. Sometimes the solutions are raw, like the scene where Lady Macbeth pours wine to the guards, as they circle around her like hogs. The sounds give off a specific vibe to the overall atmosphere, and add to the horror of the situation, by a storm of voices – from messengers of misfortune at the very start, to the silent sounds of Banquo’s feet stepping on bread in the dinner scene. Through their performance, the ensemble of actors make this play a perfect machinery which intermittently gives us goosebumps, and almost makes us cry laughing. By name, they are: Fulvio Accogli, Andrea Bartolomeo, Andrea Carroni, Giovanni Carroni, Maurizio Giordo, Stefano Mereu and Felice Montervino. Through their coordination, an absolute understanding, and complementing of the concept by the director, they simultaneously achieve extraordinary individual creations as dramatic characters, while in group scenes (mostly as witches) they reach such rhythm and a “massive scale” on stage, that a lot of us were truly amazed when figuring that the entire time we were watching only eight actors. They play stayed true to old Elizabethan tradition, so all of the roles are played by men. Interestingly, misogyny was skillfully avoided through this choice alone – so often found in today’s installments of Macbeth, where female characters (Lady Macbeth and the witches) are actually those who push to committing evil, while men are just mislead executors of their evil intentions. In Macbeth, the witches are represented as feral creatures of undefined gender, coming out from the dark, commenting on, and recognizing Macbeth’s thirst for power, more so than invoking it inside him. They are commenters of events, but also cleaners of the stage, and absolute queens of comical transitions between scenes. Lady Macbeth is played by Fulvio Accogli in this set-up, the tallest from the actors on stage. His Lady Macbeth radiates sensuality and an eeriness at the same time, almost floating on stage, like a ghost. Lady Macbeth, the one to urge Macbeth to commit atrocities at the beginning, uses the exact male principle of desire for power, in a fantastic suicide scene, and in order to give Accogli’s virile naked body – devastated by madness and regret – almost female contours. An effective image of a hanging, where the body of Lady Macbeth dangles above the scene, is especially highlighted by its gruesomeness. Macbettu is a suggestive performance which evokes imagination with the viewers through its exquisite solutions. Its main trump card is exactly the way it overtakes all the senses, as well as the masterful build-up of suspense, which awakens fear in each nerve of our being. This truly is a spectacle that we will remember a long time. Macbettu is everything that clean, raw theater needs to be – a combination of an ingenious text, director’s imagination, and playful creations from the actors. Bojana Vidosavljević