“SMASHED TO PIECES”: About the need for destruction 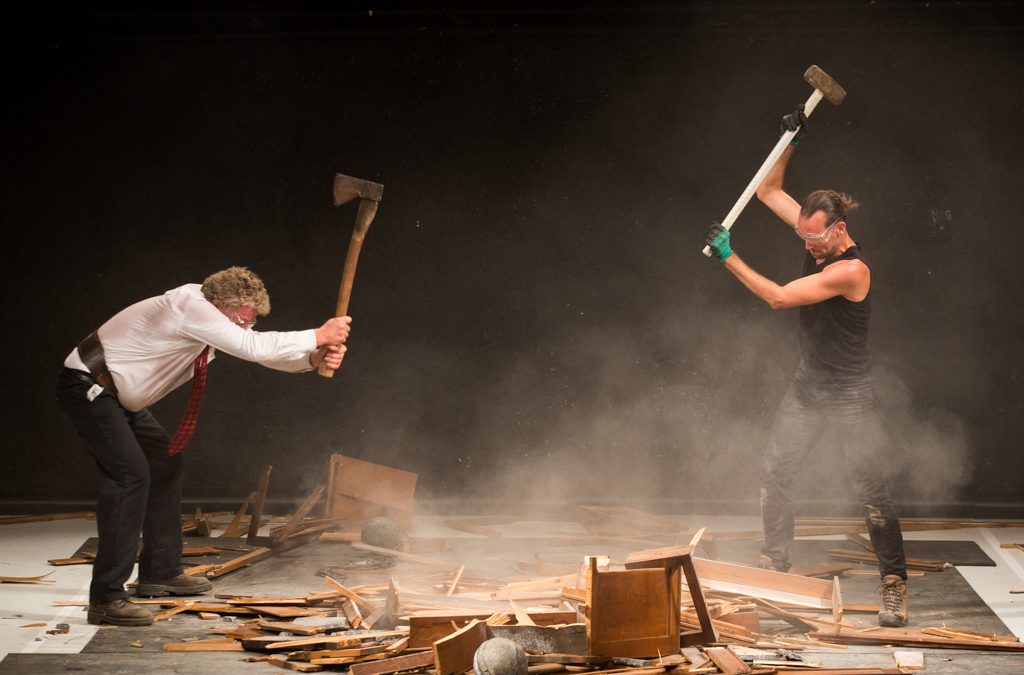 “SMASHED TO PIECES”: About the need for destruction

The stage is empty, covered with white linoleum and sterile-looking, and the title of the performance, “Smashed to Pieces”, as we are waiting for its beginning, promises destruction. Of what? Although literal destruction will definitely get staged through this performance, the question ‘destruction of what?’ will remain unanswered even after the ending of this performance, which is a good thing.

“Smashed to Pieces”, a performance which the audience had the chance to see on October 1st 2019, at the 59th edition of MESS, work of Pierre Mounier, theatre actor and director and Raphaël Cottin, theatre dancer and choreographer who first met in 2014 at the d’Avignon Festival, persistently working on this performance as part of the programme Sujets á vif, which brings artists of different backgrounds and different areas in the arts together, thus allowing them to cooperate together on a project. Created from the collaboration of these two artists is this expressive performance, with a very simple concept. We can hear squeaking of wheels behind our backs, as the two are pulling a big piece of furniture on a cart, an antique cupboard (dimensions: nearly 2 x 2 m), wrapped in protective foil, and then propping it on the stage, with great strain. They carefully unwrap it and its ornamented surface is revealed. Along with music from the radio programme Nostalgie, a popular French radio station, they start to wipe dust off it. And there really is something nostalgic, you could say, about the act of dusting off an antiquity. They find a toy in one of the drawers, a plastic dinosaur, which probably belonged to the former owner of the furniture piece. A small figurine, quickly forgotten by the characters, carries many connotations. However, Meunier and Cottin made sure to attribute an ironic tone to this nostalgia through their clown sketches. Like rhinoceroses, chairs or words from comedies of Ionesco, the dust gradually piles up to the point of the absurd, without a word spoken. More exactly, with only a few spoken words in the existing languages. The two of them act like two cartoon characters, with familiar humanoid appearance, but directed to only a single task and characterized with unnatural movements, which are determined by this alone. Then, an unexpected explosion from the inside of the cupboard. The explosion marks the start of the chaos which will ensue. We realize that the two characters are not delivery men with the task of soundly bringing the antique cupboard into its new home, as it seemed in the beginning, but are in fact two madmen who will, little by little, destroy the cupboard which they had carefully brought onto the stage, by climbing on top of it, staying trapped inside it, entirely or with limbs sticking out, in order to ultimately smash the cupboard to the tiniest pieces with axes, hammers, and wrecking balls.

Through slapstick comedy and moderate violence, Meunier and Cottin tell the story through movement, thus  enabling its more abstract, open, but still unpretentious appearance. Through perfect sense for rhythm, colorful and purposeful expressiveness of movement, and in some situations, acrobatic skills worthy of envy, mostly from Cottin, they open the space for many arising associations . The audience is also invited to participate, whether they like it or not. An example for this is when they, for safety reasons, handed out safety goggles to audience members in the first row, or when Cottin waves around a heavy wrecking ball at a four meter distance from the first row. All of that includes the audience into this simple narrative of two clowns with a primal need for destruction in an incredibly direct way. It’s as if they would like to say how drama isn’t “a dancer on a wire stretched between two sides of the bow”, but a 15 kilo ball which could knock you over the head. And truly, from personal experience, I can confirm that the suspense is greater when there is a 15 kilo balls that could knock you over the head. Of course, this doesn’t mean that each performance should lean on the direct exposure of the audience to danger in order to achieve suspense, but “Smashed to Pieces” had a good foundation for this and thanks to it they communicate with the audience on a level which is not totally conscientious . The multiple meanings behind each act seem to tie in all associations into one, into a feeling. For some reason, the destruction of the ornamental cupboard is relaxing. It seems like a revenge on some old times, cultural values, social stratification or anything else that may associate us with this piece of furniture. Some dark need to pull everything apart resting in man’s soul and to destroy all that interferes is revealed thereby. However, once the cupboard has been destroyed, it is sad to watch over its pieces which used to have its shape and function. This can be felt especially with the introduction of the third character, interpreted by Marguerite Bordat. She disappointedly starts to collect the pieces of the cupboard and neatly shaping them into something else. An interesting trivia, which can be overlooked in the performance, but is in any case symbolic and fitting to the idea of this “semi-immersive” theatre is the piece of information that Bordat is a stage designer and designer by profession. She is joined by the other two characters at the end, and then the audience members are invited to the stage as well without an explanation or instructions of what to do. But, again, following an instinct and a need arising with people to help out and rebuild after destruction, which was what happened in SARTR that evening. Helping out to build something new after witnessing destruction is a special feeling and through their asking for help from the audience, the team of authors managed to achieve an incredible merging of the worlds of the three characters on stage and the world of the audience, thus allowing the performance to truly communicate.

But seen from a completely rational and conscience side, the principle of this performance is clear, and is based on oppositions. Meunier and Cottin are different in appearance. Meunier is larger, older and more stiff in movement, which is emphasized in the performance through comical scenes where he tries to imitate the harmonious and quick movements of the younger and more slender Cottin, having his back stiffen one time around for example, due to physical strain. The same is achieved with his costume which includes a back shaper, again emphasizing the problem of limited mobility. Another clear example of the oppositions in this performance is the comparison between savage destruction and elegant movement. When Mounier finally completely destroys the cupboard, mercilessly striking it with an axe and uncontrolably shattering its pieces all around, while right beside him Cottin performs a gentle and elegant dance, shows the contrast between the construction and deconstruction, which is the foundation to the entire concept. While the cupboard exists, there exists a need for destruction. After destruction comes creation. At the end, the question of what follows after this new creation is asked. In this way we are offered with symbols which could be attributed with many meanings. However, this doesn’t mean that the performance hasn’t got a focus. Although Meunier and Cottin didn’t have the urge to stick a sign saying “myths of Western-European culture” or anything of the sort that could direct us not only to a single meaning, it is clear that their performance is focused on destruction as a primal principle that lies at the core of everything which is a step higher. And thanks to good slapstick comedy which places the audience into a trance sort of state and blindness, up until everything is destroyed, we are not aware that that which we are laughing at is quite disturbing. At the end, however, we are offered the possibility of redemption and at the same time presented with the most beautiful side of theatre which points to the fact that we all share the space of the theatre hall in the moment of the performance together, whether it’s about creation or destruction.