Spectacular round of “epic theater” 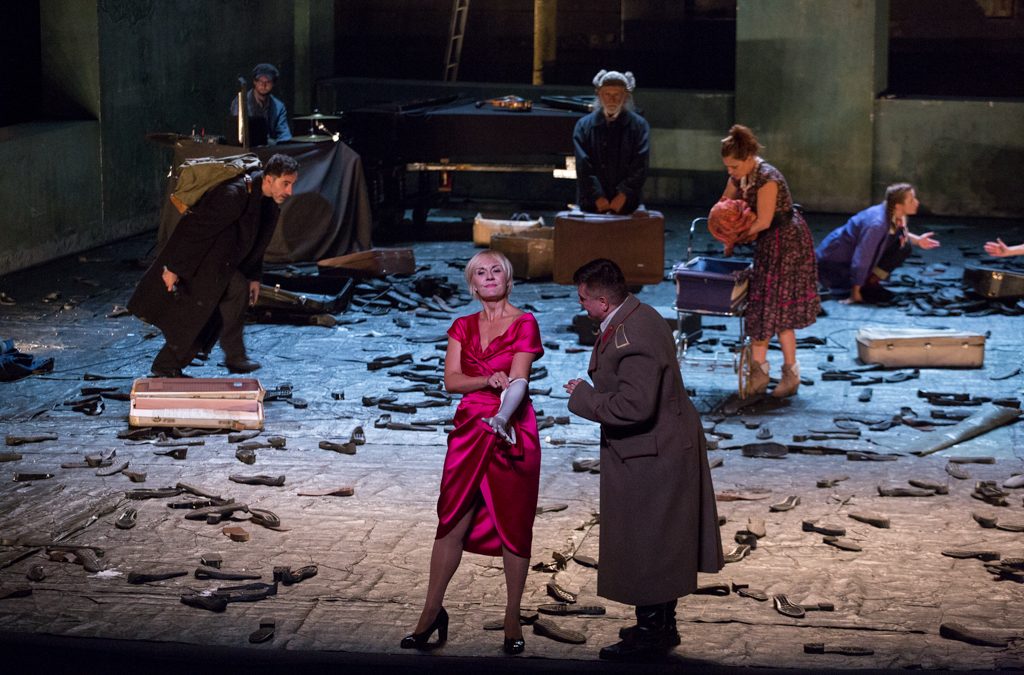 Spectacular round of “epic theater”

Performed on the second day of the 59th edition of MESS Festival was the play Caucasian Chalk Circle, based on the 1944 piece by the German playwright Bertolt Brecht, and directed by the celebrated Italian theater director Paolo Magelli. With a complete cast and a creative and technical crew from BiH, produced by the National Theater Sarajevo and MESS Scene, and dramaturgy by Željka Udovičić-Pleština, and a live musical composition by Arthur Annecchin, the Caucasian Chalk Circle arrived to the BiH stage at the right time, colliding with the moment when the performances began to resemble one another, and the author’s edges started to become blunt in pursuit of engaging content, neglecting the power of theatrical language and renouncing the classical dramatic text.

“Here we are doing the Caucasian Chalk Circle. This is one sad and a bit ridiculous story about an abandoned doll … “, writes Magelli in a” letter from Sarajevo “. The central plotline of the piece, therefore, is set at dusk of World War II, and begins among the ruins of a Caucasian village, where women, elderly men and soldiers drink wine and talk about the beauty of their villages and remember some of their past, happy times. This introductory section of Brecht’s text ends with the announcement of the performance “The Circle of Chalk”, in which the conflict rests on the struggle of two mothers for the same child and is recounted by the character of the artist Singer (ERMIN BRAVO). In order to resolve the case, the judge orders that a circle be drawn with chalk and a child placed at its center, and a woman who manages to draw him in and out of the circle will be declared his mother. With the advent of the boom of war in the city, the ironic reality begins by drawing a circle that will preempt theater and end with the announcement of a narrative of justice.

Before dressing on the soldier’s uniform, Simon (ALDIN OMEROVIC) manages to propose to the peasant Grusha (MAJA IZETBEGOVIC), the maid of Governor Georgi Abashvili and his wife, Natela (EJLA BAVCIC TARAKCHI). After Prince Kacbeki (ERMIN SIAMIJA) kills his brother Georgi, Natela is forced to leave the city. Fleeing from the rebels and packing expensive clothing, she forgets her baby, which is then accidentally found by Grusha and saves it from a certain death. The army, rapists, murderers, chase after her, to find the child and kill it as the sole heir to the governor, and by order of the ruthless prince. Grusha flees to the mountains to the north and, through her brother, arranges a marriage with an old woman and for the sake of security and a roof over her head, marries her son, Jusup (VEDRAN DJEKIC), who is on his deathbed. Meanwhile, the abandoned baby grows into the boy Michael (ISA SEKSAN), and the temporary cessation of warfare unites Simon and Grusha, but their encounter ends with an altercation and a breakup. Grusha returns with Michel to the town she fled from, where she is confronted with Natela, who is looking for a baby back because of her inheritance. The circle closes. In order to determine which of them is Michel’s mother, Judge Azdak (ERMIN BRAVO) begins the trial by drawing a circle with chalk and places the boy at its center. She who manages to draw him in and out of the circle will be proclaimed his mother.

The strict authorial concept of Paolo Magelli, which derives from Brecht’s poetics itself, which is essentially aimed at leading the viewer to rational criticism, that is, re-examining everything he sees on stage, is constructed from narrating reality, then performing it on stage and shaping it in a spirit of sarcasm. The character of the Singer, that is, the wandering artist, connects the activity on stage with the historical event that is being treated, and then in one critical relationship connects it with the audience. The singer is Brecht himself, and in this case – Magelli, who directly addresses the audience in the theater with a microphone and does not allow them to emotionally bond with the events on stage, such as the rape scene, played in a very realistic, convincing, even explicit manner, by DINO SARIJA in the role of Soldier and MAJA IZETBEGOVIC as Grusha. In fact, through his comments and songs, he tries to give them a glimpse of that and similar scenes, in order to recognize in them the reality in which they live, accept it as such and critically condemn it. This is precisely the definition of Brecht’s “epic theater” that Magelli faithfully follows in his political meaning, but also when it comes to the breadth, vastness, grandeur of the historical reality it narrates. The “alertness” of the audience, Magelli maintains with the help of another Brecht trademark, the so-called effect of amazement that he creates by imitating easily discernible sounds such as sped-up infantile speech, followed by genre excursions, among which Grusha’s fairy-tale “walk on the wire” stands out, and the unexpected stage movements and “jerks” that are caused, for example, knocking down a boulder on the stage. Also, each scene in this realization is independent and connected by the principle of editing, and even several of them are simultaneously performed on stage, which certainly keeps the viewers on standby and “allows” them to control their gaze on their own.

When it comes to the dramaturgy of the performance, it is quite justifiably entrusted with Željka Udovičić-Pleština, who possesses a concise and sharp dramaturgical eye which will not disdain from reducing eighty characters to 34 and then “dividing” them among 15 actors. Such a radical and at the same time subtle and almost insensitive dramaturgical treatment proves, in fact, what has always been known, but not always presented in one such way: that in BiH, theater certainly has the ability, talent, creativity and courage to face the most demanding challenges of playing multiple, similar or diametrically opposite roles, playing instruments, singing, dancing, participating in scenes of explicit violence and sex. However, despite the complexity of the director’s and dramaturgical concept and energetic and dramatic stage performances, for the most part of the performance, the rhythm is balanced, thanks, first of all, to the musical background of Arthur Annecchin and the live performances of Kenan Kojic, which do not aim to “amplify” the emotion and make it more dramatic in a particular scene, but rather to hold individual scenes together and round out this spectacular theater circle. What can be blamed, however, on the dramaturgy of the play is a certain dilution in the penultimate and final part of the performance and a partial decline in the pace, above all, due to the superfluous commitment to recounting Judge Azdak’s history. At the same time, Magelli’s “epic theater” exudes symbolism, with a casual commitment to religious motives and based on the traces left behind by history. Thus, the whole scene is covered with soles, the remains of shoes, which indicate the traces of all those who have been persecuted in the wars, killed, and whose footsteps must not be forgotten.

In the end, the Caucasian Chalk Circle represents a true refreshment on the BiH theatre scene. but it also found its place in this year’s MESS thematic focus, primarily because of its theatrical spectacularity that breaks through all its individual elements, a different directorial approach and concept, the energetic, harmonious, courageous performance of the entire cast, and of course, for a return to Brecht, whose “epic theater” has never been more needed in this lost society. Like Brecht and Grusha, Paolo Magelli also closes his theatrical circle in this play, and as the superficial spectator applauds for a happy ending and the victory of justice, those more experienced will be more concerned than ever before and will understand why people leave their surroundings. But also happier because they attended a true two-hour theater spectacle.