The Seduction of Violence 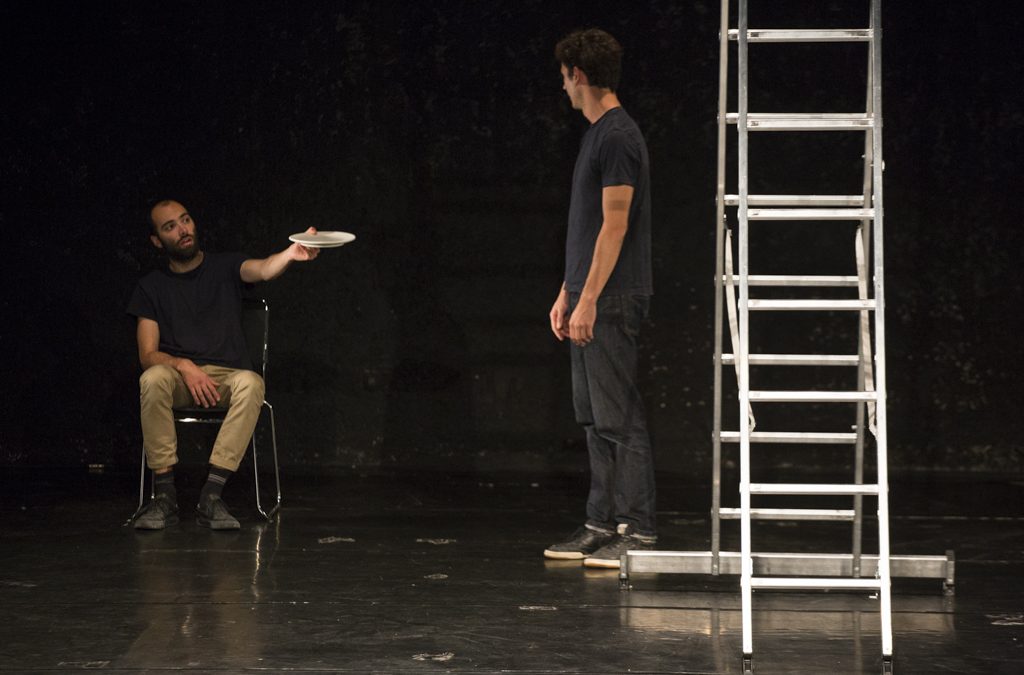 The Seduction of Violence

On the fifth day of the International Theater Festival MESS, the audience had a chance to see the performance “Palmyra” at the stage of the Sarajevo War Theater, by authors Bert and Nasi (Bertrand Lesca and Nasi Voutsas), theatric artist from France and the United Kingdom. “The ancient city of Palmyra was one of the best preserved in the world. Tourists flocked from around the world to see its temples Bel and Baalshamin, as well as the Arch of Triumph – until 2015, when ISIS gained control of the city, destroyed its temples, looted its graves and used its amphitheater to stage executions.” noted in the play’s synopsis. When you see the title “Palmyra” and when you read the synopsis, the first fright you will have is one that you will yet again watch images of destruction of a city like we see in newspaper articles each day, or that you will listen to recitals about its devastation, but that is exactly something that will not happen in this performance. Instead, Bert and Nasi are stripping down the mechanisms of policies of violence and impulses for destruction in all their banality, through the choice of their stage actions which are simple, very often humorous, and by placing the audience into the position of active participants – they are building a world of multiple manipulations. In order to achieve this, they will need an empty stage, a few reflectors, two small mobile platforms, and two plates – one that is whole and one broken. The play begins with the noting of Bert’s broken plate. Although we have never seen him breaking it, Bert thinks that Nasi had done it, and out from pure thought-out revenge, which includes bringing ladders to the stage so to magnify the entire situation – he breaks his plate. There begins a circle of aggressiveness which will perpetuate throughout the entire performance. At moments, that aggressiveness is manifested through physical disputes, and at moments through verbal insulting and passive aggression, and also through one of its most terrifying forms – the false favoring and audience manipulating so that it takes sides and decides who is guilty in the conflict, the start of which is unknown, and quite certainly, the ending. From the start, Bert and Nasi place the audience in an active position by directly addressing it, and by lobbying so it takes sides, at times charming us, each in their own characteristic ways, and sometimes offering proof about who started first. The audience should decide if it will take the hammer for keeps or if it will give it to one of them. The audience is allowed to react and make its own choices. But, not even once will that change the outcome of the performance, not even with specific scenes. Because Bert and Nasi are very good manipulators, giving us the right of choice, the choice which means nothing since the outcome of their play is not dependent on us, the same way politics aren’t dependent on the citizen’s will anymore. In one moment, the audience is told by Bert that we are in fact on his side, because we don’t understand each other, given our Western cultural heritage, and by doing so, he antagonizes Nasi about whom we know nothing except his name and his Eastern-like appearance (although he is a British actor with a Greek background). And the supposed outcome is that in that same moment, the audience is not reacting and, again it is placed into a passive position of observers, although they were given the right to participate before. This right is given as needed, and taken in the same way, and through it, power is clearly demonstrated, and policies of violence are conducted, and an imperialistic relationship from the West toward the “uncivilized” Eastern world is directly portrayed. The entire performance lies on the relationship of Bert and Nasi and its dynamics, as well as the dynamics of the relationship with the audience carried out by those two, in a masterful way. We will never hear the word Palmyra in this performance, and we will never see anything directly referring to the destruction of the civilizational monument; never will a direct line be established, and still, each line, and each gesture directly associate with this horrific anti-civilizational act and its causes. And not only that single one, but any other, as there are many examples, unfortunately. Bert and Nasi are taking us to an exam in Democracy, which we had all failed. Because violence is banal, often times seductive in its simplicity, and in the eerie lightness of complying with it. In its execution, it is as simple as breaking a single plate. And all that is left behind are shattered parts in need of being cleaned up. The power of this play lies in its simplicity, directness and unpretentiousness, wherein, through a clean language of theater these two authors are communicating to us serious and large ideas, making them accessible and easy to understand to each member of the audience. This performance is a sort of anthropological exploration about the shapes through which violence manifests and the perception of this violence in the contemporary world. Asja Krsmanović