Trauma trapped within the body 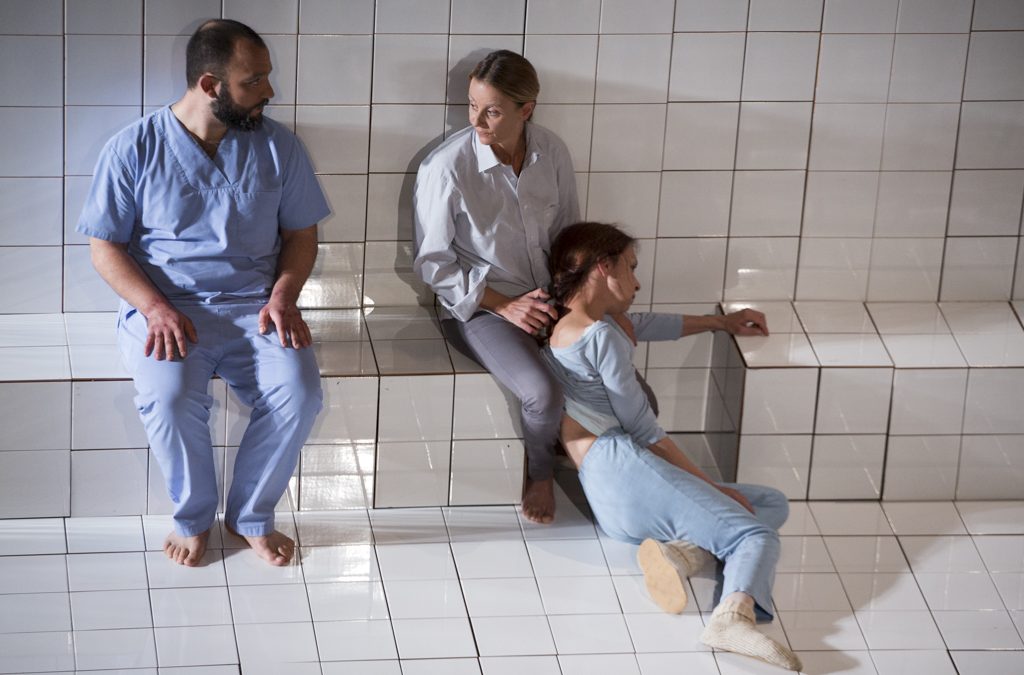 Trauma trapped within the body

On the third day of the International Theater Festival MESS, on the stage of the National Theater Sarajevo, in a chamber set-up, the ensemble of the Zagreb Youth Theater performed the play “That Which is Missing”, by author Tomislav Zajec, and directed by Selma Spahić. For this chamber drama piece, which focuses on the inability of a family to deal with different generational trauma, as well as their desperate and unsuccessful search for love, Tomislav Zajec was awarded Best drama text at the “Marin Držić” competition in 2014. Two sisters, each in their own way, are coping with the death of their mother who had left them when they were little. David, the son of one of the sisters, is a teenager who is trying to find a way to admit to his divorced parents that he is a homosexual. A humanitarian who is cheating on his wife with other men, and who will help David to experience a final breakdown, while simultaneously being unable to face his own marital issues. All of these are characters, deeply unhappy, and as one of them says at one point, people who are carrying some type of “tragic flaw” within. And indeed, there is a subtly and beautifully intertwined network of relationships in this text, which are dangling on the splitting threads, and are unsuccessfully trying to be replaced by others. The only characters that have names – Katja (played by Doris Šarić Kukuljica) and David (Adrian Pezdarić), are the ones who attempted to do something in order to get accomplished outside their families because of which they had decided to tear the same fragile family relationships, resulting in isolation and a tragic ending. Has family really become only an obstacle or is the way we understand it in need of being re-questioned? Is it possible to end the course of generational trauma or are the characters inevitable victims of what has happened in the long run of family history? Is it probable that the ice block will melt or is it necessary to break it up in pieces, and to face and unmercifully confront with everything? Is it possible to conquer Mt. Everest, win over fears and understand others? All of this is explored by the ensemble of the Zagreb Youth Theater in the staging from Selma Spahić. Spahić places these characters of Zajec in a world in which reality constantly clashes with the embodiments of their inner trauma, accentuated primarily through scenic movement arranged by Blaženka Kovač Carić and music by Alen and Nenad Sinkuz which create an atmosphere of nausea, tension, and highlight the “crackling” inside the inner world of the protagonists. All elements of this performance are perfectly balanced, from actor’s play to music, scenography, lighting, and so they create a unique composition inside of which it seems that less is truly more, and the course of which completely takes over the viewer, avoiding any pathetic displays, but providing the possibility of identification. The scenography by Mirna Ler is composed from an unidentifiable space made from white ceramic tiles, which appears as a hospital waiting room, with an inclined part at one end – Mt. Everest, that the characters need to climb in order to become accomplished individuals and to release their trauma. On their way there, they help each other at times, and at times they clash into each other, and at one moment they are slipping down altogether, leaving an impression of Sisyphean labor. The tiles as an icy reflective surface on which images are mirrored, is both a minimalist and a very domineering solution that is in perfect order with other elements of the play. Another very important element is scenic movement. While the characters are trying to “touch” on each other by words, and only succeeding in these attempts at times, this trauma from the inability to communicate remains trapped inside the body, and like a flood, it returns as part of moments of realization. Movement is often in contrast with the conversational action from the actors and represents inner experiences of the characters (as in the scene where one of the sisters talks with the nurse about her dead mother, coming there to sign some papers in her name, and the entire time, like some type of burden, the mother is clinging onto her and pulling her down with her body). Through movement, the traumas of the characters are embodied, and these traumas are constantly present in dialogue as part of some parallel world, inside of which there is some type of telepathic dialogue going on between the bodies, the surface of which is only scratched by words in the real world. The characters are often talking about each other through a third person, while the body of the one absent, and who is talked about, is barricaded between them, like some shadow. Through movement, intergenerational communication is also done, and through it – it’s recognized, and ultimately, all that was not even touched upon in the real world – is accepted. The bodies are mountains inside of with tectonic movement is happening, caused by trauma. The ensemble of the Youth Theater in Zagreb has once again confirmed its unwritten status of one of the best ensembles of the region. Their performance precisely and consistently follows the director’s vision, and altogether they present before our society some important questions like the questions of sexual identity, and doing this subtly and thoughtfully. By confronting prejudice they offer a possibility of understanding and empathizing, which is one of the noblest missions of theater. The play ends with the literal ice picking of an ice block on stage. To confront trauma, to overthrow the constrictions from society, to understand others, to forgive yourself, at least to try to conquer Mt. Everest – all of this is possible only through concrete action.